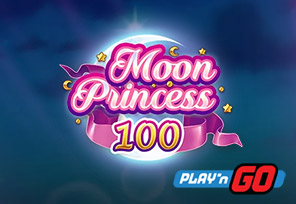 Play’n GO, a well-known casino software developer, after the successful release of Moon Princess Christmas Kingdom, presents its latest online title in which you will equally enjoy the powers of the three princesses Love, Storm, and Star – Moon Princess 100.

This fantastic online release will give you a chance to experience an unforgettable adventure with beautiful princesses. The grid is set on a background adorned by The Aurora Borealis and is made up of 5 reels, and 3 rows. A punter can make winning combinations when at least three symbols land side by side horizontally or vertically.

This high-volatility online release brings the theoretical Return to Player which is a shade above average and is 96.2%, but also the possibility for punters to win up to x15,000 the stake!

Moon Princess 100 is enriched with plenty of beautiful symbols including low-paying ones that are a circle, a star, a heart, and a bell as well as high-paying ones consisting of beautiful princesses Love, Storm, and Star.

The Wild symbol, which is represented by a full moon, will replace all the symbols during the game and thus help you create more winning combos. If 5 symbols of this type come in view it will pay x50 the bet.

Each time you create a winning combination, the Winning Drop feature will be activated. The symbols that took part in the winning combo will disappear from the grid, and the remaining symbols will go to the bottom, allowing you to create new winnings.

A very famous feature, the Girl Power will be activated again this time at a random moment when the punter does not create a winning combination. Each princess can bring you different features:

The Bonus Spins feature will be triggered when the punter manages to remove all the symbols from the grid. However, if this happens, in addition to activating the feature, Play’n GO will reward players with x50 the bet!

In addition to the above, you will be able to take advantage of the Trinity feature during which bonus rounds await you.

Commenting on the new release, Head of Games at Play’n GO, Charlotte Miliziano said: “Time is the ultimate critic of our games, and its clear to see that they withstand that test, especially when we add new editions of already popular games. Moon Princess has been a powerhouse of a slot since its release in 2018 and we’re seeing a resurgence of older games like another 2018 grid slot, Rise of Olympus which has seen a new wave of attention from operators and players alike. Like the original, Moon Princess 100 will be a hit for years to come.”