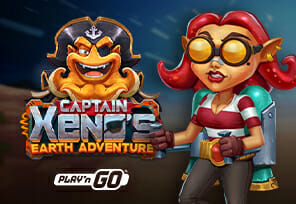 Our friends from another planet have a problem because their pirate ship broke down. The closest planet they could land on was Earth.

In the new online title from Play’n GO, the heroes will do their best to fix the alien pirate ship before being seen.

The grid is located in the middle of the desert somewhere on Earth. It is composed of 5 reels and 4 rows. However, thanks to Dynamic Payways, the symbols can be divided and thus expand the number of rows.

In this high-volatility online game, the punter will encounter fantastic symbols, but also 1024 ways to win that can be increased up to 100000 ways to win. The theoretical Return to Player is slightly above average and is 96.2%.

During this adventure, the player will surely notice the beautiful graphics, but even more beautiful symbols. They are divided into low-paying symbols that are in the theme of the cards including A, K, Q, J and 10, and high-paying ones – the aliens in the colors green, blue, pink, red, and orange.

However, we must not forget the special symbols such as the Wild (blue W), as well as the Scatter (capsule with a yellow lightning bolt).

This Online Slot Brings Much More!

If you thought that was all, well you were wrong! In this online slot you will find plenty of special features including Electric Shock, Emergency Wilds, Engine Recharge, and Free Spins.

Electric Shock – on each of the reels one random symbol will be selected which will become the splitting symbol. It will be divided into two parts, and as a result, the number of ways to win will increase. Only symbol that cannot be selected as a splitting symbol is the scatter.

Emergency Wilds – this feature will be activated after the symbols are duplicated. Then a random number between of Wild symbols will land on the reels (between 1 and 5).

Engine Recharge – will the vehicle engine be repaired? This feature will be activated at random moment and thus increase your chances of activating Free Spins.

Last but not least, Free Spins – this feature will be activated if 3 or more capsule symbols land on the grid. 3, 4 or 5 scatter symbols reward punters with 8, 10 or 12 free spins. Each of the scatters that land on the grid during this feature will be collected, and when the number of collected capsules reaches 7 punters will be rewarded with an additional 4 free spins. Then it will be possible to divide the symbols into 3 parts instead of 2. If you collect an additional 4 capsules after that, new 4 free spins will follow, and the symbols will be divided into as many as 4 parts.