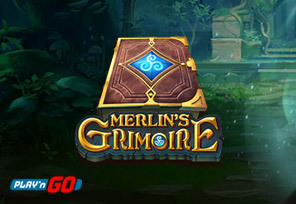 The most powerful wizard in the world of online casino entertainment is back with a bang in Play’n GO’s latest slot Merlin’s Grimoire, the latest addition to the brand’s incredibly popular Arthurian Legend series. The fourth story about Merlin the Wizard is chock-full of free spins, big wins of up to 30,000x bet, and unexpected twists and turns – the main character appears as his young and inexperienced self on the search for the book of spells!

Focused on the advantageous Symbol Splitting feature, this 7776 ways to win title delivers plenty of excitement already in the base game, however, it is the free spins bonus that can generate truly whopping prizes by splitting the special expanding icons.

Merlin As a Young Warlock

After the debut of Rise of Merlin in 2019 and the launch of Lord Merlin and the Lady of the Lake and Merlin and the Ice Queen Morgana last year, Play’n GO releases the fourth spinning story about the widely-beloved wizard. The most recent Arthurian Legend title features Merlin as a young warlock with no experience who has yet to discover not only the secrets to the art of magic but also his own destiny.

“Players and operators love the Arthurian Legend titles that we develop because even in one series there are so many tastes accommodated.

“Fans of Merlin now have four titles to choose from and for the hopeless romantics, there’s 15 Crystal Roses: A Tale of Love, for the lovers of lore The Green Knight. I could go on…”

Indeed, while there is no accounting for taste, there are casino games to suit all tastes. As for Merlin’s Grimoire, it has everything to become a firm favorite of a great many players: engaging gameplay, tons of free spins, and striking winning potential of 30,000x bet.

The Power of Splitting Symbols

No doubt, the highlight of this casino slot is the fantastic ability of its reels to split symbols for bigger wins. In the base game, only reels 2, 3, and 4 can work magic while during free spins, all five reels can split beautifully crafted icons, increasing the number of winning ways up to a maximum of 7,776.

As for free spins, they are triggered by the sought-after ancient book of spells, which, by the way, is a wild scatter, meaning the Grimoire also substitutes for all other symbols. Hitting three or more books anywhere on the screen brings 10 initial spins, however, the luckiest punters can grab up to 60 free rounds in total. During the bonus, players can maximize their wins by splitting the expanding symbols that cover the whole reel.

Just like the majority of slots from Play’n GO including released a week ago NSYNC Pop, this fantasy-themed title offers a pretty wide range of stakes that starts at $0.10 and goes up to $100.