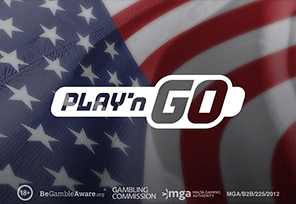 Play’n GO, one of the most famous and leading casino software providers in the online gambling industry, announced that the company has achieved another goal by entering a new market!

It regularly launches new titles that become very popular in a short time. One of them is the recently launched Mega Don, which will amaze you with its interesting gameplay and engaging features.

However, the new step is a little different! The company recently presented its plans to conquer the North American market.

Play’n GO proudly announced that it has made another significant move! Namely, this popular provider has taken a step towards another key market, which will further improve the brand’s position in the iGaming industry.

It has entered the US market and thanks to the Provisional Internet Gaming Supplier (B2B) license the company is ready to present its wide portfolio to punters from the Wolverine State!

On the platforms of operators that will partner with this innovative developer, players from this state will have the opportunity to get an unforgettable iGaming experience with fan-favorite titles such as Rich Wilde and the Book of Dead, Reactoonz, Rise of Olympus, Legacy of Dead as well as many more. These titles will surely delight this audience thanks to the interesting and engaging features and interesting gameplay.

CEO Johan Törnqvist commented on the new move and said: ”This is a landmark moment in the history of Play’n GO. We started by designing casino games specifically for mobile before the smartphone even existed, and now are breaking into America as the leading supplier to more than 25 regulated markets globally which is such a credit to everyone at Play’n GO. We believe we are uniquely positioned to succeed in the US.”

Törnqvist added:“Our aim is to see Play’n GO games become as beloved in the US as they are in every other regulated market around the world. We know that each regulated market is different and that this will take time in the US, but we are absolutely committed to expanding our footprint across the country.”

The Michigan market is the first state where Play’n GO left its presence. Judging by the company’s plans, we believe that this premium casino software developer will further expand its business roots in the United States in the near future.

Just a few months ago, more precisely at the beginning of the year, Play’n GO guaranteed further approval that enabled the brand to make a move toward another regulated market, Gibraltar. The green light came straight from the Licensing Authority of Gibraltar and marked an important milestone for the brand.