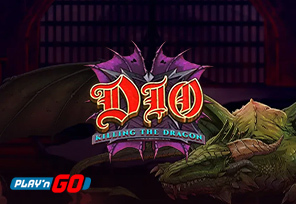 Play’n GO has announced the launch of its latest online casino slot Dio – Killing the Dragon, a feature-packed tribute to the legendary American heavy metal band. Inspired by the success of Def Leppard: Hysteria, Alice Cooper and the Tome of Madness, ZZ Top Roadside Riches, and other titles from the exclusive collection of rock ’n’ roll-themed games, the studio lets players join the fantastic celebration of Dio’s legacy.

Lock Up the Wolves is just one of many engaging bonus features intended to help Ronnie James defeat the fire-breathing dragon and bring players big wins. Naturally, all fans of good music will also have numerous opportunities to enjoy such mega-hits as Holy Diver, Don’t Talk to Strangers, Evil Eyes, and We Rock.

The creator of some of the world’s most sought-after slots Play’n GO has further replenished its iconic music series with the launch of Dio – Killing the Dragon. Alice Cooper and the Tome of Madness, KISS Reels of Rock, Twisted Sister, and, of course, Lordi Reel Monsters and Def Leppard: Hysteria released in April have become universal favorites in a heartbeat and are in high demand across online casinos.

“Our music series has quickly become one of our favorites and we absolutely loved putting together this tale of Dio. We’re always thinking about the players and the most fun part was seeing just how many features we could pack into the game for them.

“Our design team really outdid themselves with the visual details, putting players inside this authentic fantasy land alongside Dio and we’re thrilled they will be able to enjoy the legacy of Dio’s music on the jukebox!”

Magic of Music and Bonuses

Thanks to Play’n GO who, by the way, made its New Jersey debut last month, players will have a unique opportunity to join Dio’s legendary lead vocalist Ronnie James and take advantage of the magical powers of his music to land wins on the unusually shaped 5-reel grid.

The bravest of the brave who can catch enough scatters to unlock their way into a castle will witness the ultimate showdown between Dio and Murray, a mighty fire-breathing dragon. During the free spins bonus, the appearance of Land Sticky Wilds and other special symbols unlock a host of additional features to deliver even bigger wins.

Another two perks available during free spins are the Fallen Angel feature that contains a falling wild icon and special symbol upgrades that turn the lowest Monster icon into a DIO symbol. Plus, wild multipliers take the winning potential of this slot to the next level, significantly boosting original prizes while the Lock up the Wolves bonus supplies players with continuous Re-spins.