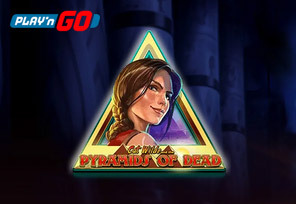 After its recently launched hit title called King’s Mask, Play’n GO, one of the leading casino software developers known for its innovative content presents another Ancient Egypt-themed online slot that offers you the opportunity to catch big prizes!

The grid is located in front of one of the most famous Egyptian pyramids and consists of 5 reels, 3 rows, and 10 paylines. Cat Wilde and the Pyramids of the Dead is a medium volatility online game that will provide you with unforgettable gameplay accompanied by an amazing iGaming experience, but also the opportunity to win a life-changing sum of money – up to 10,000 the stake!

The theoretical Return to Player is, as in most cases, higher than average and is 96.2%.

The features that punters are sure to have fun with include the Wild symbol, Bonus Games, Jackpot Round, Instant Prize, Bonus Spins, and Gamble.

To get to these amazing bonus games, you will first need to get acquainted with the paytable which is made up of low-paying, high-paying, and special symbols. The first group is card-themed and consists of A, K, Q, J, and 10. The second group consists of the Scarab, Anubis, Pharaoh, and Cat Wilde, and the third is the Wild symbol, which is also a scatter symbol and is presented in the form of a pyramid.

The Pyramid will help you create more winning combos by replacing all symbols except special expanding symbols during the game.

Three such symbols in view will activate one of the three bonus games, namely Bonus Spins, Jackpot Round, or Instant Prize.

If the Jackpot Round feature is activated, players will have to choose three matching symbols from 12 different urns to win one of the jackpots.

Depending on whether the 3, 4, or 5 pyramids were in view if the Bonus Spins feature is activated, the player can be rewarded with 8, 10, or 15 bonus rounds. During this game, one of the symbols will initially be chosen as a special expanding symbol.

Bonus Spins rounds can be retriggered, and for that, you need 3 pyramids to come into view. Then you will get 5 extra bonus spins, and if you continue like this you can get up to 55 in total.

Head of Games at Play’n GO, Charlotte Miliziano, said: “IP titles as respected as the Dead series and characters like Rich Wilde and Cat Wilde are truly powerful. But with great power comes great responsibility, and opportunity too. It’s an opportunity to explore new avenues for these characters to evolve and innovate features to keep players coming back for more content. “

The post Play’n GO Returns to Egypt to Bring Cat Wilde and the Pyramids of the Dead first appeared on RealMoneyAction.com.