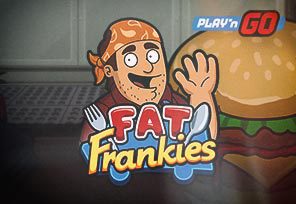 Play’n GO, a premium developer of online slots, takes us on an unforgettable adventure of trying out top specialties produced in a small food truck in its latest online slot – Fat Frankies.

Some Info That You Should Know!

The grid is located in front of the food truck and consists of 5 reels, 3 rows, 243 ways to win. Big Tony will do his best to prepare the best food you have ever tasted, and in this high volatility online game, he will give you the opportunity to win up to x6000 the bet! Delicious!

The theoretical Return to Player is slightly higher than average and is 96.2%.

Low-paying symbols are card-themed and include cups in green, blue, purple, and red. Now comes the better part! High-paying symbols that adorn the grid are various junk foods such as fries, tacos, burritos, hot dogs, and hamburgers. A wild and scatter add even more ways to win to the mix!

As in most cases, the Wild will replace all symbols on the grid except the scatter and give players the opportunity to create more winning combinations.

Three or more scatter symbols in view will activate the Frankies Special feature. The punter will then be rewarded with one of 4 possible features including Burger Bonanza, Flip the Tip, Greasy Wilds, or 5 Star Spins.

The Greasy Wilds feature brings you a spin where you can be rewarded with up to 5 Wild symbols.

The 5 Star Spins feature will bring 10 bonus spins in this online slot, and each time the star lands on the grid, two extra bonus spins are awarded, along with a x1 multiplier.

Head of Games, Charlotte Miliziano gave a comment and said in the statement: “Fat Frankie’s is the tastiest game in town. We’re in the business of entertainment and this narrative really lends itself to the four features. It’s cool to see how Frankie starts out to where he finishes by the end of the game with the player helping him on the road to success. Trust us, it was as much fun to make as it is to play. Players will be hungry for more.”