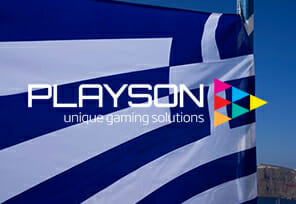 Developer of casino games and an excellent software brand, Playson, has just signed an agreement to introduce its games to Fonbet. This step will extend the provider’s presence in another regulated jurisdiction, Greece.

European brand Fonbet has recently received a Greek license and has already introduced its online site in the country.

Following the new deal, Playson will deliver all 30 titles that are certified for the market, involving Legend of Cleopatra Megaways

, Hand of Gold, and Hot Coins: Hold and Win.

“We’re delighted to be working alongside Fonbet and support the operator’s launch in the Greek regulated market.

“This deal once again illustrates the trust that new operators place in our games to drive player engagement and retention. Our content is proven to resonate with players across multiple European countries and is already forming a strong player base in Greece.”

Vice President at Plumo Limited (Fonbet.gr), Yiannis Zafiratos, says that partnering with experienced and famous game developers such as Playson is a significant move when delivering an online offering in another market. They are confident the company’s games will enable them to draw a large volume of customers. They are excited about having endless opportunities with the new agreement so they are looking forward to working with Playson.

Recent Moves from the Brand

Playson has also introduced another slot to its versatile portfolio. Going forward, players will enjoy 5 Fortunator with gems-style and different symbols. The Wild symbol is available as a sparkling crown, with the expanding possibility and chance to release additional winning combos. This game is also supplied with other key features such as Gold and Diamond Scatters. They can be combined with the red seven and offer the highest pay-outs. The red seven is one of the most generous symbols together with the golden bells.

Playson is hosting an award-winning September tournament around Megaways games. The event will take place between September 23 -30, and allow players to trigger big winnings. The total prize pool is €60,000 and one lucky player will claim the first prize of €10,000! To qualify for the event, players must place at least a €0.50 bet and points will be calculated every round. Every won bet equals ten points. Eligible games are Book of Gold: Multichance, Buffalo Power Megaways

, Buffalo Power: Hold and Win and Burning Wins: classic 5 lines, among others.

The post Playson Enhanced its Foothold in Greece via Fonbet Agreement first appeared on RealMoneyAction.com.