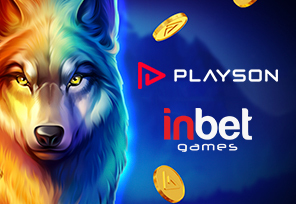 Playson, a famous Malta-based casino software developer known for its engaging and premium content, has recently consolidated its position in Europe thanks to an agreement with the well-known online iGaming brand Magic Jackpot.

However, this innovative provider continues to grow its presence across this region, as evidenced by the new collaboration.

Playson announced that it has shaken hands with the outstanding, Bulgaria-based operator, Inlet. The agreement between the two brands will result in the launch of the developer’s extraordinary slots portfolio on the new partner’s platform.

As agreed, the partnership will include enriching the operator’s games lobby with the best, feature-packed, and super popular titles among punters across the globe.

Players from Bulgaria who decide to explore Inbet’s offering will have the opportunity to get an unforgettable iGaming experience with fan-favorite titles including Wolf Power: Hold and Win, Stars & Fruits: Double Hit, and Divine Dragon: Hold and Win.

Inbet will be able to take advantage of this cooperation thanks to various features and mechanics that will further attract the attention of players including ‘Double Hit’ mechanics.

This mechanic will allow punters to spin the reels across two grids and ensure a win every time a scatter appears on both.

Both brands will enjoy the great collaborations that this news brings. First of all, Inbet will drastically enrich its offering, which will strengthen the trust of the operator’s customers and potentially attract new players. On the other hand, strengthening the European presence through this deal will bring Playson closer to its goal of becoming the leading supplier in Europe, but also in the industry in general.

Blanka Homor, Sales Director at Playson, said: “Teaming up with such a rapidly growing operator as Inbet is a fantastic step for us, and we are thrilled to be a part of its exciting new projects. Our high-tech titles have spent consistently been popular among players in and around the CEE countries, and we can’t wait to continue attracting audiences in that region and beyond.”

Playson also recently reaffirmed its presence in the Baltic region. The company has guaranteed a distribution deal with one of the leading operators in the region. The deal is the video launch of Playson’s product on the OlyBet casino platform, and this fantastic portfolio can be accessed by punters from Estonia and Latvia.