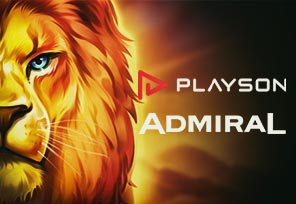 Playson, one of the globally renowned casino software developers of premium and engaging online top-tier online slots, has announced that it is further expanded its global reach to Croatia via an agreement with Admiral Croatia.

As specified in the deal, which follows the provider’s recent venture into Serbia, Playson will launch its wide slots portfolio on the platform of this famous casino. Admiral’s offering will be drastically expanded with some of the most sought-after and highly engaging online slots. Those who decide to check out the platform will get the opportunity to explore fan-favorite titles including The Fruit Megaways, Eagle Power: Hold and Win, and 9 Happy Pharaohs as well as many others.

The agreement will see the benefits for both brands. Namely, Playson will further expand its business scope as well as its wide list of partners, allowing it to provide further progress. On the other hand, the operator will strengthen its popularity on the Croatian market and attract even more punters by providing them with these fantastic titles.

Blanka Homor, Sales Director at Playson said:“We are thoroughly pleased to announce this deal with Admiral Croatia, a leading player in the country’s online casino market. This agreement means that our content can be found at the ten most popular online operators in Croatia, which is great news for fans of our slots in the country, as well as our efforts to extend our foothold in this important region.”

Playson is one of the most well-known casino software developers in the iGaming industry. The brand was established in 2012 and the company is headquartered in Sliema, Malta. Playson’s portfolio consists of over 75 engaging and innovative online casino releases that have quickly become popular among punters around the world. Also, the brand recently left its footprint in Italy through a partnership with Tuco Productions, and we believe that new deals will follow soon.