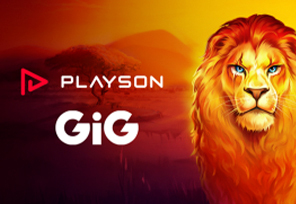 Playson, innovative developer, announces that it has signed a new agreement that will see the expansion of its global reach!

Playson is proud to announce that it has put pen to paper to sign another significant distribution agreement with the well-known B2B brand Gaming Innovation Group (GiG).

It will supply its new partnership with plenty of amazing, feature-packed, and some of the most sought-after products in the industry.

Thanks to this agreement, Playson will be able to distribute its portfolio even further, which will bring the company closer to achieving its goal of becoming a convincingly leading brand in the online gambling industry.

Clients who choose these titles will guarantee an unforgettable iGaming experience with well-known and popular features as well as dynamic gameplay.

Blanka Homor, Sales Director at Playson, said: “We’re delighted to have reached an agreement with GiG in order to supply its impressive list of customers. I’m sure they will benefit from our content. The deal will help us to grow even more quickly and meet our ambitious expansion targets in the years to come.”

Martin Collins, Director of Sales and Business development at GiG, added:“We’re pleased to have Playson on board and incorporate its much-loved games to our platform. Playson has quickly become a recognized name thanks to its excellent casino titles, their addition further strengthening the commerciality and attractiveness of our product offering.”

Already at the beginning of June, the company made another major move. Namely, the brand joined forces with the well-known operator Inbet and thus strengthened its position in Europe. Players from Bulgaria can now indulge in their favorite form of entertainment with Playson’s innovative online casino games including Wolf Power: Hold and Win, Stars & Fruits: Double Hit, and Divine Dragon: Hold and Win.