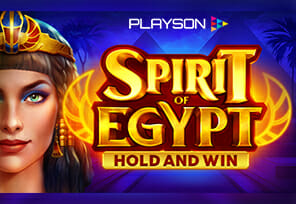 The recent 3×5 slot includes Hold and Win mechanics and provides customers unlimited entertainment as they go through the ancient debris of Egypt in a chance to win big.

Players will be immersed by the Bonus Scarab Symbols which mix and augment to provide customers with bigger pay-outs within the Bonus Game. Six or more symbols are needed to activate the Bonus Game, which allow the game field to enhance to 5×7 and the traditional three re-spins are delivered to the player.

Spirt of Egypt: Hold and Win also includes three in-game Jackpots that can be earned during the Bonus Game, with the Grand Jackpot providing an impressive payment of x5,000 bet.

The gameplay is additionally enhanced with the addition of Stacked Wilds, which land as Scarab Ladies, as well as Bonus Spins, triggered by landing three Scatters, which land on the central reels.

The Bonus Spins mode consists of a Synced Reels feature, which can connect 2 to 5 adjoining reels. The highlighted reels then showcase the identical combination of symbols, enhancing the chances of winning.

Playson’s suite of Hold and Win titles have become widely popular among different players, who enjoy the immersive mechanics and different in-game features throughout the gameplay.

Reacting to the addition of the new title, Head of Product at Playson, Vsevolod Lapin, said:

“We’re taking players back to ancient Egypt following the positive response to our previous release, 9 Happy Pharaohs, but with the addition of more intriguing features for players to experience.

“The latest title offers players larger multipliers courtesy of the merging bonus symbols. We’re certain that Spirt of Egypt: Hold and Win will resonate with our audiences and provide them with a thoroughly enjoyable gameplay.”

Playson is a top-notch supplier of games which delivers innovative content in more than 17 regulated jurisdictions and wider. Its suite of 65+ omni-channel casino titles are tested and certified for all leading European regulated territories such as Malta, Italy, Spain, Sweden, UK, Romania. The company looks to expand its presence in new territories. Playson’s team is spread across several locations including Malta, Ukraine, UK and Greece. It has licenses from the UK Gambling Commission, the ONJN from Romania and Hellenic Gaming Commission. It is based in Malta, Sliema.

“Playson Embarks On An Ancient Adventure With Spirt Of Egypt: Hold And Win”, playson.com, October 7, 2021.