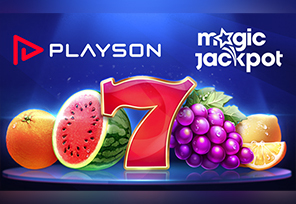 Playson, one of the leading and most popular iGaming software developers, once again secures its presence in Europe after the company signed an agreement with OlyBet to launch its content in Estonia and Latvia.

Namely, the good news comes straight from Romania, where the provider once again left its footprint after shaking hands with the famous online iGaming brand, Magic Jackpot.

The strengthening of the Romanian presence will see the launch of the developer’s fantastic and outstanding online casino titles on the platform of the brand. Magic Jackpot’s customers will have the opportunity to try out some of Playson’s fan-favorite titles and thus guarantee an unforgettable iGaming experience. These titles are feature-packed and engaging and will surely hold your attention.

Blanka Homor, Sales Director at Playson said:“We’re excited to reveal our latest collaboration in Romania, ensuring we expand our presence in a market that has steadily grown since its regulated online launch in 2015. We look forward to working with Magic Jackpot and supplying our games to deliver even greater engagement for its online platform.”

More on the Brands

Magic Jackpot is one of the most popular online casino brands established in Romania. Very quickly, the company achieved success and became one of the most recognizable. Its offering features more than 90 fantastic games, and we believe there will be many more soon!

This deal will strengthen the developer’s position in Romania. It comes after the Playson secured a license issued by the Romanian regulator, ONJN three years ago. Also, with this move, Playson consolidated its presence in Europe as well.

This agreement was preceded by several deals that also significantly improved Playson’s position in Europe. Namely, after the developer conquered Serbia thanks to the deal with Balkan Bet, a collaboration with the Croatian operator followed.

This famous casino software developer left its foothold in this beautiful country after shaking hands with Admiral Croatia. The partnership between these brands saw the launch of Playson’s slots portfolio on the operator’s platform and included hit titles such as The Fruit Megaways, Eagle Power: Hold and Win, and 9 Happy Pharaohs as well as many others.

We believe that Playson is preparing many more surprises by the end of the year and we are looking forward to them!