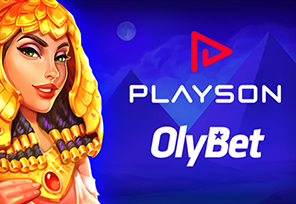 Playson, one of the leading developers of premium online casino content that recently left its footprint in Croatia thanks to an agreement with Admiral Croatia, has now announced that the company has taken another step towards meeting its global expansion goal.

Namely, this popular and innovative casino software developer has joined forces with the famous Baltic casino OlyBet. The deal between the two brands will see the launch of Playson’s popular and engaging casino content in two key markets, Estonian and Latvian.

Products to be Included in Distribution

As specified in the contract signed by Playson and OlyBet, the distribution will include the developer’s premium and fan-favorite online casino titles. Punters who choose to explore the offering of this popular operator will have the opportunity to check out some of the most sought-after titles in the iGaming industry including Ruit Megaways

. These fantastic titles will be available to players on OlyBet’s Estonian and Latvian websites.

This collaboration will be an important milestone for both the operator and the provider. First, Playson will further strengthen its presence in Europe by confirming its presence in Estonia and Latvia. This step will also further improve the supplier’s position in the iGaming industry. On the other hand, this choice of number one casino will drastically expand its offering, which will once again strengthen the trust of the operator’s customers and thus show them that the choice of this casino was a great decision.

Blanka Homor, Sales Director at Playson, said: “We’re delighted to have reached an agreement with OlyBet, allowing us to deliver our high-quality digital casino content to more players in Latvia and Estonia. As part of our refreshed brand identity, which includes a renewed focus on expanding our presence across Europe, growing in two markets from one deal is a pleasant and important outcome.”

In addition to the aforementioned expansion of developers to Croatia, this premium developer has stepped into another fast-growing market – Serbia. The deal saw the merger of Playson and the famous casino in this country, Balkan Bet. Players from Serbia who have opted for this operator can enjoy Playson’s fantastic releases such as Lion Gems: Hold and Win, Burning Fortunator, and Wolf Power Megaways, but also take advantage of integration-free tools such as Cash Blast and Reel of Fortune.

‘’Playson Expands In The Baltic Region With Olybet Partnership’’, playson.com, May 5, 2022.

The post Playson Strengthens Presence in Estonia and Latvia Thanks to OlyBet Deal first appeared on RealMoneyAction.com.