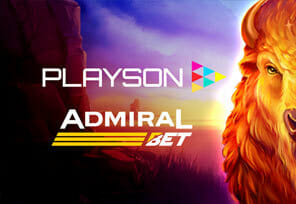 Playson, the leading software and iGaming content developer, has signed a partnership with Admiralbet.rs, one of the leading Serbian operators and the leading operator in the Balkans region.

Thanks to the partnership, the developer’s top-performing titles will go live with the Serbian-based operator. Titles such as Book of Gold: Double Chance, Legend of Cleopatra and Solar Queen are some of the most popular titles from the brand’s extensive offering.

Players at Admiralbet will also be able to enjoy the supplier’s new UI, featuring enhanced content for mobile gaming.

Pleased to Enter a New Partnership

Representatives from Playson, which recently secured its ISO 27001 Certification, say that they are happy about signing a partnership with Admiralbet and that they are excited about introducing their players to their content.

Commenting on the deal, Playson Sales Director Blanka Homor said: “We are thrilled to be teaming up with Admiralbet.rs, in a move marking the start of a partnership that will strongly benefit both parties.

“As our coveted game collection continues to improve even further, so too does our constantly expanding operator network, allowing us to introduce new players to our titles in a variety of global markets.”

Officials from Admiralbet, which recently teamed up with ORYX Gaming, say that Playson’s titles have earned a deserved reputation in the industry and that they are delighted about integrating their titles to their offering.

Bojan Kesic, Head of Business Development at Admiralbet.rs added: “Playson’s unique games have earned a deserved reputation as some of the most exciting available on today’s casino market, so we are delighted to be integrating them.

“Our customers have grown used to a high standard of entertainment, and we have no doubt that they will welcome Playson’s immersive releases enthusiastically.”

Playson is one of the leading game developers supplying operators with tested, certified, cutting-edge content, all over the world. The company operates inside regulated markets, including markets in Malta, Spain, Italy, Sweden, the United Kingdom and is always looking for new markets to enter.

The company provides unique solutions for iGaming operators all over the world, from math mechanics to continuous integration support.

Its portfolio has over 50 omnichannel games as well as the portfolio of promotional tools. Playson is well positioned to meet the needs of the most demanding iGaming operators, thanks to their comprehensive framework. It has teams of professionals stationed across Malta, Ukraine, UK and Greece. Its most popular games Are Imperial Fruits, Fruit Supreme, Solar Queen, Book of Gold and Viking Fortune.