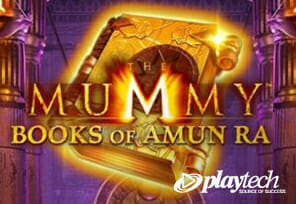 From the writings and works of art of the ancient Egyptians, we can conclude much about their mythology and beliefs in their Gods. Pyramids, ancient buildings that can still be found in parts of Egypt, testify to the history of these people. The oldest pyramid we know of was found in Sakkara, northwest of Memphis.

This radiance led various producers, writers, and many others to direct their creativity during the creation of certain works towards ancient Egypt and all the wonderful secrets that this culture brings with it.

One of them is director of the movie “The Mummy Returns,” Stephen Sommers, whose idea a few years later played a role in the creation of a new slot game, The Mummy Books of Amun Ra, from famous casino software developer Playtech.

The graphics of this online slot will delight you as well as the character symbols from the movie. You will enjoy this online title via 5 reels containing 10 paylines. The RTP stands at 95.97%. Expectations will be offset by high volatility as well as the chance to win 10,000x your total stake per spin!

If Rick O’Connell (Brendan Fraser), who plays the role of a premium symbol here, shows up, he will pay x500 your stake. He will be accompanied on his journey by the beautiful Evelyn O’Connell (Rachel Weisz), but we will not neglect the other main characters who will bring you enticing treats during this online journey!

To win the Bonus Round you need at least 3 golden book wild/scatters anywhere on the reels. If you land 3, 4, or 5 scatters, you will get a 2, 20, or 200 times your bet win respectively!

For those who want to reduce their stake, the provider has secured a 0.1 minimum bet. The company has not forgotten all of its adventurous players, offering a maximum bet of 200 coins.

Origins game producer, Yehonatan Tishler, said: ”It’s been fantastic bringing all the action and excitement of the iconic The Mummy film series to the new Books of Amun Ra game. With five different Free Games modes to choose from, all with their own special feature, Books of Amun Ra is the perfect slot for players looking for varied, feature-rich gameplay.”

Overall, Playtech made an effort to exceed expectations and has certainly succeeded. Considering the large number of similar-themed online titles currently present on the market, it is great to see that some iGaming software developers are still willing to improve this highly popular genre.