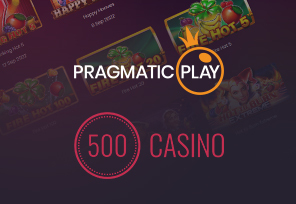 Pragmatic Play, one of the most famous iGaming software developers known for its innovative and premium library of titles, has once again found a way to expand its business roots even further.

This popular casino supplier of terrific games often enters into collaborations that help the company to get closer to its goal of global expansion.

Just a few days ago, it struck a major deal with one of the leading operators, Deu Jogo, and on that occasion, brought three of its verticals to the Brazilian market, including online slots, live casino games as well as virtual sports products.

The Streak of Success Continues!

Pragmatic Play, which recently went live in the UK and Ireland, has announced that it joined forces with another fast-growing operator to deliver its products to an even wider audience.

The list of the provider’s partners will now include the popular 500 Casino, and the deal between these two brands will see the launch of two Pragmatic’s portfolio on the new partner’s platform.

According to the agreement, the developer will supply its new collaboration with an array of its outstanding online slots as well as with multiple live casino products, which are some of the most sought-after products in the online gambling industry.

Also, the brands have prepared a selection of provider’s live casino releases including the popular classics Blackjack and Roulette along with the latest released Boom City and slot-themed Sweet Bonanza CandyLand™.

Irina Cornides, Chief Operating Officer at Pragmatic Play, said:“Adding 500 Casino to our ever-growing list of clients is key to our multi-vertical strategy. It’s another exciting commercial deal in which we look to further our footprint in targeted regulated markets like Latin America, Europe, and Africa.”

Christoffer Andersson, Chief Operating Officer at 500 Casino, said: “Providing our players with the best games available on the market is paramount to our continued success, and we are thrilled to be welcoming Pragmatic Play’s substantial portfolio to our offering. Its titles provide a seal of quality to any casino and we are very pleased to be able to offer two of its core verticals to our customers.”