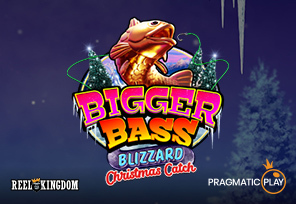 These two brands have joined forces several times before and delivered fantastic adventures that became a real hit after a short time! Just a few days ago, these two giants presented Snakes & Ladders Snake Eyes, a title that joins the popular the Snakes & Ladders collection.

Are you ready for another Big Bass adventure?

This time we are going on a fishing adventure, but in Christmas style!

Bigger Bass Blizzard Christmas Catch features a grid made up of 5 reels, 4 rows and 12 paylines.

This exciting adventure gives us the opportunity to take advantage of incredible features, engaging gameplay as well as big prizes!

Namely, players who decide to go fishing with the old fisherman will have the opportunity to catch big wins – up to x4000 the bet!

The Return to Player is higher than average and amounts to 96.08%.

Well-known symbols will accompany you in this adventure as well. Players will get to know card-themed ones as well as a tackle box, a float, a fishing rod, and a fisherman driving a snowmobile.

As before, the fisherman will be the Wild symbol and will help you create more winning combos by substituting all symbols except the scatter.

Money symbols will make this game even more interesting. During the base game, you need at least 5 such symbols to collect their value.

At least 3 scatter symbols are required to trigger the Bonus Spins feature, which can reward you with 10, 15, or 20 bonus spins.

During this feature, the Wild symbol will help you to collect money symbols when it appears in view.

This is just another fantastic title born from this collaboration, which was preceded by Little Gem!

Irina Cornides, Chief Operating Officer at Pragmatic Play, said:“The Big Bass franchise has always proven to be a go-to game for slot enthusiasts thanks to its cutting-edge features and thrilling mechanics. Bigger Bass Blizzard Christmas Catch™ takes the gameplay to a new level with a revamped winter aesthetic, while building on the big win potential and progressive bonuses that have become an essential aspect of the series.”