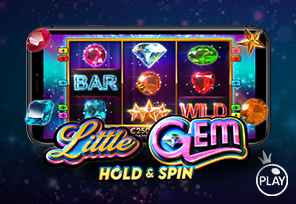 Pragmatic Play, one of the well-known developers in the iGaming industry known for its premium content, has reunited with the Reel Kingdom. Namely, these two brands have been successfully cooperating for some time, as evidenced by titles such as Snakes and Ladders Megadice, Emerald King Rainbow Road, Ultra Burn, and much more.

This time, the companies have decided to take players on an adventure with precious gems, and valuable prizes await you during the game!

If you are a fan of classic online slots, Little Gem will delight you! This 3×3 video slot will bring you the opportunity to win up to an amazing x2460 the stake! The theoretical Return to Player is also above average, as is everything else in this outstanding title, and it is as high as 96.7%. Want to know more? Let’s go!

Featuring some of the most beautiful symbols, this adventure will surely stay in your heart for a long time! The grid will be enriched with various gems in a row, orange, and blue that will represent low-paying symbols. Medium-paying ones are not much different and they are three stars and a pink game. However, the ones you will surely enjoy the most are high-paying ones including green gems, BAR, and a white diamond.

During your spins, you will also be introduced to special symbols that include the Wild, silver, and bronze money symbols as well as diamond money symbols.

The Wild symbol will substitute for all symbols other than money symbols during the game. If it is part of the winning combination, the Wild will expand to cover the reel.

Players can also take advantage of the Hold and Respin feature. If a player manages to land 3 silver or bronze money symbols on the middle reel, this feature will be triggered. The symbols that participated in the activation will remain in place, and punters will be rewarded with 4 respins. This number will restart to 4 each time a new symbol comes into view.

provides players with a blend of simple gameplay and rewarding multipliers that effortlessly complement each other. The visually striking theme delivers an engaging environment as users try and reach the bonus feature, and we expect players to see a return to the dazzling experience time and time again.”

, and we believe that plenty of new outstanding titles await us soon!