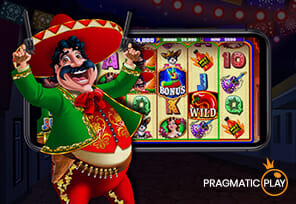 To get to this online slot we must travel to a small ancient city in Mexico where we are greeted by a Big Juan dressed in traditional Mexican clothing with a sombrero on his head. The grid is composed of 5 reels and 4 rows that we can meet very often, and it will be decorated with low-paying card-themed symbols, and high-paying icons such as guitars, hot sauce bottles, chihuahuas, señoritas, or Big Juan señors.

This title from Pragmatic, which also recently released its John Hunter and the Quest for Bermuda Riches slot, contains 40 paylines, and they can bring lucky players a maximum payout of 2600x the stake.

The theoretical Return to Player of this game is above the average and is high as 96.70% as stated on the provider’s official site.

Yossi Barzely, Chief Business Development Officer at Pragmatic Play, said: “We are back with another Mexican-themed adventure, following on from the popular, Day of Dead

. The joyful soundtrack and eye-catching animations on display in Big Juan

provide a real feast for the senses, topped only by the huge win potential on offer in the Free Spins bonus round.”

What Are the Special Features in Mexico? Let’s Find Out!

When we talk about special features, we must mention that first of all, this slot has two phases: a base game and a respin bonus round.

In the base game, when six identical symbols land on reels number 2, 3, and 4, all these symbols will turn into chilli wild symbols (Wild Switch feature).

If 3, 4, or 5 scatter symbols appear on the grid, the player will receive 10, 12, or 15 respins and thus activate the Respins Feature. In respin feature mode, the grid will change to 3×3 with an additional 4th reel that has only one position.

All in all, surely all the players who opt for this title will enjoy the Mexican culture and the special features that appear during the game.

This is just another in a series of titles that Pragmatic recently released. Some of the slots that preceded it include the Mexican-themed Day of Dead which was modeled on the Mexican holiday of the same name, Star Pirates Code and Cash Bonanza.