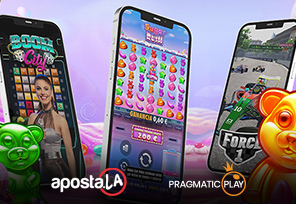 Pragmatic Play, one of the most well-known and recognizable iGaming software developers, has decided to strengthen its presence in one of the industry’s key markets.

As we have had the opportunity to see so far, Pragmatic does not hesitate to expand its global reach whenever possible, which we can also notice thanks to the recent collaboration.

The developer is further solidifying its position Paraguay once again, which will be helped by a new partnership with one of the most popular operators in this market, Aposta.LA!

These two giants presented their new agreement to a wide audience, according to which the developer will enrich the platform of its new partner with various popular and sought-after online casino products!

First, players will be able to take advantage of multiple online slots that will catch your attention thanks to engaging features. The operator’s games section now features the award-winning hit Gates of Olympus™, several recently introduced releases Happy Hooves™ and Octobeer Fortunes™, and much more.

Also, the offering has been expanded with the live casino vertical – classic titles Roulette and Blackjack as well as modern-style Sweet Bonanza CandyLand and Mega Wheel.

The agreement includes Pragmatic’s virtual sports vertical, and sports fans can expect football (Fantastic League) as well as horse and greyhound racing, which will be available in the upcoming period.

Victor Arias, Vice President of Latin American Operations at Pragmatic Play, said: “Aposta.LA is a familiar brand to Paraguayan consumers, so this agreement is particularly pleasing for us. We’re confident that its players will enjoy our diverse, high-quality games.”

Fernando Ribeiro at Aposta.LA added: “We’re committed to providing the very best in casino entertainment and we’re delivering on that mission with this agreement with Pragmatic Play. Our casino lobby receives a significant boost with their slots portfolio and we are looking forward to see two other verticals roll out.”

In addition to Paraguay and many other countries, Pragmatic pays the most attention to the Brazilian market. Namely, punters from this country show great interest in this type of entertainment, which encouraged this giant to strengthen its position in this region as much as possible.

It has sealed several partnerships with casinos that operate in this market. Some of them are Chutebet, Deu Jogo, Smashup, Instabet, BNR Bet as well as much more!