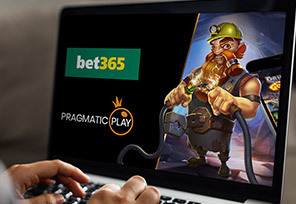 Pragmatic Play, one of the leading developers of premium online slots and extraordinary live casino products, has recently once again strengthened its presence in Venezuela thanks to a collaboration with La Troya Hípica.

However, the company announced that Pragmatic Play has re-expanded its list of partners with new deals. Namely, this popular iGaming brand has shaken hands with the globally known operator bet365!

As agreed between these two giants, Pragmatic Play will launch its wide library of slots on the platform of this outstanding casino! The distribution will include some of the best, most interesting, and engaging online slots that have proven to be among the most recognized in the industry by players.

Clients who opt for bet365 and decide to check the offering of this brand will have the opportunity to gain an unforgettable iGaming experience with titles such as multi-award-winning Gates of Olympus and Wolf Gold as well as the recently launched Drill That Gold, Chicken Chase, and much more.

bet365 has announced that the operator will be part of the Drops and Wins promotion from now on. Namely, Pragmatic Play gives £1,000,000 per month to players of its operator partners every month, regardless of whether customers have embarked on a survey of online slots or Live Casino products.

Thanks to the fantastic agreement concluded between these two brands, the companies will have great benefits. First of all, Pragmatic Play will further strengthen its already solid position in the United Kingdom, but also in other key markets. bet365 will drastically expand its games lobby, which players will appreciate and appreciate. By expanding the offer, the operator will once again show why the choice is number one!

Julian Jarvis, CEO of Pragmatic Play, said: “bet365 is a brand that needs no introduction. As the largest operator in our industry, taking our slots live with them is a hugely important moment for us as we continue to grow. We pride ourselves on our premium, multi-vertical offering, and this deal gives us significant scope to grow together with bet365.”

Pragmatic Play is a Malta-based developer established in 2015. Recently, this outstanding developer joined forces with Stake to launch its products further. Specifically, the deal between Pragmatic Play and Stake will see the launch of a new dedicated live casino studio.

This studio will contain as many as 12 tables, each of which will carry Stake branding.

In addition to this, Pragmatic Play has recently sealed several other important collaborations including the one with 888casino as well as with the Romanian Superbet.