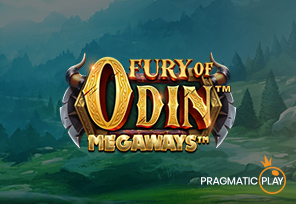 Pragmatic Play, one of the leading and fastest-growing casino software providers of incredible and feature-packed online casino releases, delivers an exciting adventure that will surely amaze you!

After the recent release of the fishing-themed online slot Bigger Bass Blizzard Christmas Catch, and Santa’s Great Gifts, the supplier is traveling to ancient Greece this time! So, let’s find out what it has prepared for us!

Although the Return to Player shade is lower than average and amounts to 95.97%, this high volatility online casino adventure brings you something that will compensate for this minimal deficiency. Namely, in addition to outstanding features, players will have the opportunity to win a life-changing sum of money – up to x15,000 the bet!

We must also look at the beautiful symbols that will contribute to making the game even more interesting.

The paytable is made up of low-paying card-themed ones including A, K, Q, J, 10, and 9 as well as high-paying ones that are Odin himself and 3 warriors!

The Wild symbol will help you create more winning combinations. How? During the game, this beautiful symbol will replace all other symbols. However, this rule does not apply to Scatter or Fury symbols.

The game also features the Tumble feature. Namely, every time a win occurs, the symbols that participated in the winning combo will disappear and, in their place, new ones will descend from the top.

If you land at least 4 scatter symbols on the grid, you will trigger the Bonus Spins feature. Then, players will be awarded with 10 bonus spins, and each additional scatter brings 2 extra bonus spins.

Irina Cornides, Chief Operating Officer at Pragmatic Play, said: “We excel in creating feature-packed titles that allow players to experience Norse-inspired adventures, and Fury of Odin Megaways™ brings yet another thrilling journey into this popular mythology via intuitive gameplay. The game has the ability to deliver huge wins worth up to 15,000x, along with a bonus round feature that can be retriggered over and over again, providing an instant draw for players.”