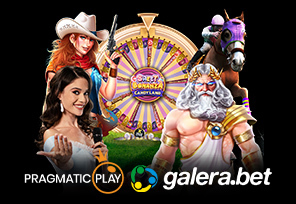 Pragmatic Play, one of the most innovative and respected iGaming content developers in the online gambling industry, has left behind another very successful year!

Namely, in 2022, the company concluded a large number of collaborations that helped it to get closer to its goal of global expansion and guarantee an even more enviable position in the industry.

One such partnership was with mycasino a few days ago, and this time the company is moving to LatAm!

Now, Pragmatic further strengthens its presence in Brazil via a new collaboration with Galera Bet.

The deal between these two giants, as stated in the contract, will see the launch of several feature-packed and engaging online casino titles on the new partner’s platform!

This means players from Brazil who decide to visit the operator’s games section will have the opportunity to engage in their favorite form of entertainment with some of the biggest hits such as recently launched Reel Banks™ and Fury of Odin™ as well as multi-award- winning and fan-favorite Sugar Rush™ and Gates of Olympus™.

Victor Arias, Vice President of Latin American Operations at Pragmatic Play, said: “We welcome Galera Bet and its players as the latest to benefit from our expanding range of games and we thank them for further extending our reach into Brazil. We look forward to a long and fruitful relationship.”

Galera Bet Representative said: “We’re delighted to sign this deal with such a prominent supplier as Pragmatic Play and to see its games live. Its games are among the most popular in the country and having them at our disposal is a huge boost to our brand.”

As already mentioned, this successful collaboration was preceded by numerous partnerships that marked an important milestone for Pragmatic.

One such deal helped the company strengthen its position in Venezuela after the developer joined forces with the well-known Liderendeportes.be.

The end of the year is around the corner, but we won’t be surprised if this developer brings more amazing news in the coming days!