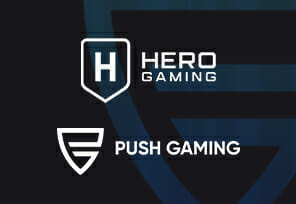 During this year we have witnessed many agreements between gaming brands. However, this year has not yet come to an end, so we can expect more successful cooperations. It seems that Push Gaming and Hero Gaming got along very well during their first collaboration because they have now decided to extend their partnership!

B2B gaming supplier, Push, will allow its partner’s players to peek into its wide range of online slots via its MGA and UKGC-licensed platform. Hero’s online casinos will become richer for famous titles such as Jammin ’Jars 2, Booty Bay, as well as the most recently released fantastic Fat Drac. These releases will be one of the first to adorn Hero’s casinos.

Hero Gaming is not the only operator whose fans will enjoy these games. Casino Heroes, Boom Casino, and Simple Casino will also be on the list of users, and will be among the first to try out ‘player-first’ designs in titles made by Push Gaming.

After several partnerships this year with WhiteHat Studio and Danske Spil, Push does not want to give up for a second. The company is constantly trying to expand its network globally.

Commenting on the release, Fiona Hickey, Head of Sales at Push Gaming said: “Hero Gaming has provided a leading shop window for our games for some time, but this move is going to be a boost to the streamlined delivery of our content to its players.

“The team at Hero have been a pleasure to work with over the years and all at Push are delighted to see this continue via our own platform.”

On the other hand, Sven de Waard, Casino Manager at Hero, expressed his thoughts, stating that the brand is delighted and proud to have created a work-friendly environment that includes innovation and creativity, and that its friendship with Push is just a continuation of all that. He added that the release provided by the supplier illustrates the culture they strongly nurture.

Not Missing a Single Prize!

At the very famous EGR B2B Awards 2021, Push Gaming entered the shortlist for 4 more awards after recent victories at the Casino Beats Game. These awards were followed by the announcement of the extension of the partnership, which everyone was looking forward to given the excellent results that both sides have achieved during their cooperation.

In 2020, Push acquired the licensed MGA and UKGC platforms and thus ensured its progress in the period that followed. It has expanded its network to some very strong and important markets across Europe such as Casumo, LeoVegas, Entain, and The Rank Group where its products are still available to players.

Recall that Push recently released new products that are now live such as Fat Drac and Mount Magmas.