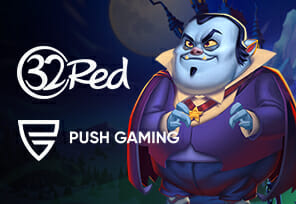 The United Kingdom iGaming market has become increasingly popular recently. For this reason, developers are opting to launch their products in this country. This is made possible by partnerships with UK operators.

The highly regarded casino software developer, Push Gaming, has once again expanded throughout UK market after the company shook hands with the famous 32RedCasino.

With this collaboration, Push, which also recently teamed up with 888casino, will open up even more opportunities for advancement in this country, but it will also expand significantly.

Per the agreement, some of the biggest hit online titles of this well-known casino provider will be found in the wide offering of this operator. 32Red’s clients will be able to try out iconic online slots such as Jammin ‘Jars 2, Fire Hopper as well as the upcoming Bison Battle and Big Bamboo.

32Red operates under the Kindred Group, and with this collaboration will strengthen the trust of its customers. Namely, players will be able to enjoy some of the most sought-after titles in the iGaming industry on their favorite platform.

Commenting on the announcement, Fiona Hickey, Head of Sales at Push Gaming said:“Deals of this stature reflect how far we’ve come as a studio that always puts players first. 32Red is a premier operator and exactly the type of business we’re looking for in a commercial partner. Its commitment to providing the highest quality entertainment experience is a perfect match and we look forward to delighting its audience for many years to come.”

After having a lot of success in the previous year, the developer decided to start 2022 off in a big way. In 2021, Push Gaming picked up significant prizes in prestigious competitions such as the Casino Beats Game Developer Awards, the Game of the Year at the 2021 SiGMA Europe Awards. However, the company was also shortlisted for a few more prizes at the EGR B2B Awards 2021.

Push Gaming first appeared in the iGaming industry in 2010, and the company is headquartered in London, UK. The brand is known for producing innovative, interesting online slots that are an engagement for players. Every punter in the Push Gaming library can find a title that suits him perfectly.

So far, the brand has expanded its business network to some very important markets thanks to numerous collaborations, including deals with Casumo, LeoVegas, Entain, The Rank Group, Betsson, and PaddyPowerBetfair, MrQ, etc.

The post Push Gaming Conquers the UK Market Thanks to Partnership with 32Red first appeared on RealMoneyAction.com.