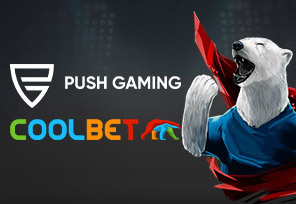 Push Gaming, an innovative and popular casino software developer, is expanding its business scope as well as its list of partners thanks to the collaboration the brand has entered with its new partner – Coolbet. Thanks to this deal, the developer will leave its presence in several other key markets where this fast-growing casino operates.

As agreed between the two brands, Push will launch its very popular products on the platform of this operator. The distribution will include some of the most sought-after titles such as Nightfall and Big Bamboo. However, that’s not all!

Brands have announced that Coolbet’s offering will be expanded with soon-to-be-launched releases such as Fat Banker, as well as fan-favorite slots from the famous Jammin ’Jars series.

Merging these two brands is a very important milestone for both companies. First of all, considering that Coolbet operates in markets such as Sweden, Estonia, and Ontario, the supplier will leave its foothold both in Europe and in the North American market. On the other hand, the operator will drastically expand its offering with some of the most famous titles in the industry.

Fiona Hickey, Head of Sales at Push Gaming said: “It is a pleasure to partner with Coolbet, this deal comes at an exciting time as we continue to work on providing the industry with our most varied and high-quality releases to date. Equally, Coolbet currently operates in Ontario and has a presence in PushLatin America and this represents a great opportunity for both parties to focus on future growth in these burgeoning markets.”

Patrik Backlund Head of Casino and Games at Coolbet added:“Providing our players with the highest standard of engaging titles available on the market has always been a key goal of ours. We are incredibly proud of this latest deal with Push Gaming, which will help us further achieve this target. Push’s vast portfolio of fan-favorite titles will both engage and excite our players and we look forward to seeing the reception its extensive slot offering will receive.”

In addition to the mentioned brand, Push also collaborates with LeoVegas, Entain, 32red, 888, Casumo, Betsson, Svenska Spel, and PaddyPowerBetfair as well as many others.

The post Push Gaming Signs Partnership with Coolbet to Strengthen Presence in Europe and North America first appeared on RealMoneyAction.com.