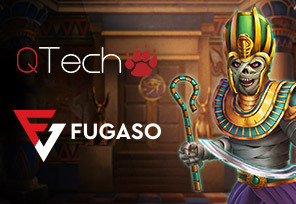 QTech Games, one of the leading and fastest-growing brands in the iGaming industry, has announced that it will further expand its already wide offering via the latest integration deal with one of the most famous developers of progressive slots.

Namely, the top-tier brand announced that it has concluded a distribution deal with one of the leading independent games studios, Fugaso. This agreement will see the interaction of the studio’s innovative and engaging content on the QTech platform. The provider is one of the world’s most famous brands; it has many online casino games in its portfolio and distributes them worldwide. Evolution and Yggdrasil are among the providers whose content is on this platform.

Thanks to this collaboration, online casino games that will be available on the QTech Games platform are Fugaso’s blockbuster EPICWAYS series, not-so-long-ago launched The Sword & The Magic online slot as well as various fan-favorite fruit-themed releases.

The studio’s games are optimized for mobile devices, with a focus on QTech’s RNG model. Players who opt for these games will have the opportunity to have an unforgettable iGaming experience, and for all questions and concerns, they will have access to customer support.

Thanks to this deal, Fugaso’s content will reach an even greater number of punters, including hitherto intact jurisdictions in Asia, Eastern Europe as well as in Latin America.

Ulf Norder, CCO at QTech Games, said:“We’ve committed to rolling out high-quality content that drives revenue for our partners. Therefore, this deal with Fugaso extends our relentless pipeline for the year so far. In today’s marketplace, only premium games of the highest standard separate you from the crowd, so we’re delighted to see how Fugaso has delivered on this demand. That entails stunning graphics, coupled with the latest maths models for improved gameplay and high-variance volatility where required.”

Robert Metzger, Head of Business Development at Fugaso, added: “We’ve been reigniting the slots space with deeper gaming experiences ever since bursting onto the scene in 2016. Teaming up with QTech constitutes a great opportunity to strengthen our product distribution across emerging territories and brings our novel content to a panoply of potential partners. We look forward to seeing how these games now perform with new players and plan to expand this partnership in the months ahead.

“QTech Games strengthens its premier platform with Fugaso’’, europeangaming.eu, May 4, 2022.