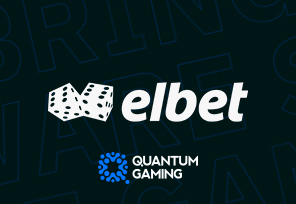 Quantum Gaming announces that it has sealed another significant partnership with one of the most popular casino software developers, Elbet!

The brand is known for its ever-growing platform that features hundreds of outstanding titles from popular providers, recently joined by the well-established, Tom Horn Gaming

What to Expect from the New Agreement?

Both Quantum and Elbet have joined forces in yet another incredible distribution agreement! As agreed between the two giants, Elbet will deliver a wide range of its incredible online casino products to its partner’s platform!

This means that Quantum’s network of partners will now have access to some of the most popular online casino games, as well as the developer’s set of promotion tools that will increase player interest, such as combination betting, progressive jackpot, and numerous wager types and odds.

Quantum will gain an array of content like dog and horse racing, football league, and virtual football.

This agreement marks a major milestone for both parties, which will reap great benefits. Namely, Quantum will drastically expand the offering of its ever-growing platform, which is considered one of the best!

On the other hand, this popular casino software supplier will launch its content further thus reaching a wider audience and an even more enviable position in the online gambling industry.

Commenting on the deal, Quantum Gaming’s CEO Oliver De Bono had this to say: “Diversity, versatility, and reliability are three of the most important factors when it comes to finding trusted partners in the casino game development sphere, and Elbet and the good people behind the company check all three of these important boxes, which is why it’s such a pleasure to strike a partnership with them. We look forward to growing and succeeding together.”

Quantum Gaming is one of the well-established casino software aggregators known for its impressive platform that features some of the most popular titles in the industry.

The brand will certainly leave behind a successful year marked by numerous partnerships, including one of the most recent!

Just a few days ago, the brand concluded another fantastic distribution deal with Gamzix!

We believe that 2023 will be even more successful than the current year. We will be patient and wait for more amazing news!