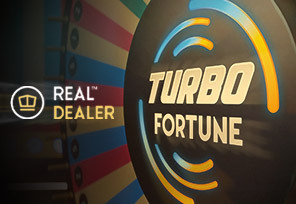 Real Dealer Studios, an innovative provider of unique online games that merge live casino and RNG gameplay for a superior player experience, has replenished its popular money-wheel series with fast-paced Turbo Fortune packed with big multipliers. In contrast to the original Fortune Finder releases, the newest title does not feature a presenter, meeting the demands of players with a need for speed.

Shortly after letting punters enjoy a turbo-charged roulette experience, Real Dealer Studios offers thrills of fast-paced gameplay to all fans of the popular money-wheel concept. Building on the success of the original Fortune Finder series, the Malta-headquartered developer of cinematic casino content has just launched a streamlined version of the immersive show game.

“The Fortune Finder series of games has already proved a hugely popular addition to the Real Dealer Studios line-up, but now we’re taking that winning concept and putting it firmly in the fast lane with the brand-new Turbo Fortune.

“In an age where time is an increasingly valuable commodity for online casino players, we’re sure this streamlined version of an established Real Dealer classic is going to prove a phenomenal success. We can’t wait to see it start speeding its way into operator’s game lobbies over the coming weeks.”

Inspired by the glitz and glamour of classic TV game shows from the 1980s, it lets players plunge into the one-of-its-kind atmosphere created by an unapologetically flashy backdrop and thrilling multiplier rounds.

Despite the absence of a charming presenter…

…this title is incredibly exciting thanks to its very dynamic gameplay with shorter game rounds, an impressive range of quick betting options, and an advanced autoplay function that keeps the action rolling. The real highlight of Turbo Fortune, however, is its ability to deliver big wins generated by compound multipliers.

Similar to other games in the Fortune Finder line-up that are adorned by the million-dollar smiles of Sarati and Holly, this turbo-charged edition provides players with the possibility to significantly increase their original winnings and pocket whopping prizes.

When the special multiplier feature is activated, the dedicated wheel spaces boost the potential payouts for the next spin by 2x or 7x. The great thing is that multipliers can be stacked up one after the other to deliver truly epic wins.

Turbo Fortune is a high volatility game with a pretty wide range of stakes that starts at $0.25 and goes up to a maximum bet of $50.