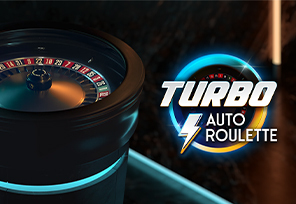 Roulette is a world-famous game that is the number one choice of several punters and its popularity can be felt around the world.

Innovative casino software developers, Real Deal Studios, announced that the company launched its latest version of roulette which will, we can say with certainty, win the hearts of punters very quickly.

This fantastic product contains an interesting sci-fi design enriched with neon light and pleasant music that will enhance your experience – Turbo Auto Roulette.

Players who like fast play will enjoy this version of roulette because it offers fast gameplay with quick rounds, and the adventure takes place on a dark background.

Turbo Auto Roulette contains elements recognizable for the developer who through each of his releases permeates the theme of the film mixed with the iGaming experience.

With Real Dealer Studios’ products, punters will get the Hollywood experience thanks to filmmaking technology, but also outstanding actors.

Difference Between this Version and American Roulette

Turbo Auto Roulette comes with a Return to Player that is high as 97.30%. If you decide to check out this version of the popular game you will have a chance to win up to 64,500 coins. The minimum bet you can opt for is 0.25 coins while Real Deal Studios has limited the maximum bet to 1,000 coins.

Shane Cotter, Chief Product Officer at Real Dealer Studios, said in the statement:“Turbo Auto Roulette was designed for players seeking fast-paced gameplay while enjoying the immersive experience we’re known for providing. During the game’s initial limited release, we’ve seen a fantastic response from players, already breaking numerous records. This is definitely a title to watch out for.”

Real Dealer Studios was established in 2019, and the brand’s headquarters are located in Sliema, Malta. At the beginning of 2022, the company signed a deal with the globally known operator William Hill, thanks to whom it will launch its most popular products on the .com and .uk platforms. As many as five amazing titles are available at William Hill and Mr Green casino brands.