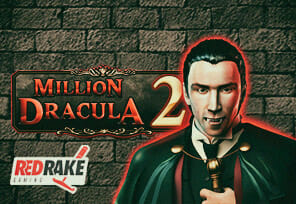 One of the most famous casino software developers, Red Rake Gaming, recently launched its new online slot. Namely, after the great success of the iconic title Million Dracula, the provider has released Million Dracula 2.

In the new online release, players will have the opportunity to encounter features from the first version, but also new ones that will blow your mind.

The grid is located in the basement of an old building, made up of 6 reels and 3 rows that can be extended up to 10. It will be decorated with low-paying symbols that are in the theme of playing cards including A, K, Q, and J, medium-paying ones made up of three types of colorful candles, and high-paying ones that include a suitcase, bat, and mummified monster.

In this online game, given the possibility of expanding the number of rows, punters will be able to meet up to 1 million ways to win.

This medium to high volatility game can delight you with a maximum possible win of x10,000 the bet!

If we take into account that the average RTP is 96%, then this online release has a theoretical Return to Player which is below the average and is 95.3%. However, Red Rake has made up for it with fantastic special symbols and features such as a wild symbol, free spins, and a Dracula’s Treasure feature.

Dracula is the wild and during the game will help you create more winning combinations by substituting all symbols except the bonus symbol.

Also, the punter will have the opportunity to meet The Dracula’s Treasure mini game which will only be activated when the accumulator is filled with the treasure chests. This will only be visible when the fence is removed and all rows are exposed. The feature will start with 4 holy waters and will end when you run out of them or when you reach the last row.

This fantastic title was preceded by online slots providers that won the hearts of punters in a short time and reached popularity, and they include Max Dangerous And The Lost Relics, Alchemy Ways, Tommy Gun’s Vendetta, Nefertiti’s Riches as well as many others.

During the year, the provider expanded its business network by entering into partnerships with some of the very well-known brands such as Hub88, SISAL, Nossa Aposta, 888ladies, SkillOnNet, but also many others.