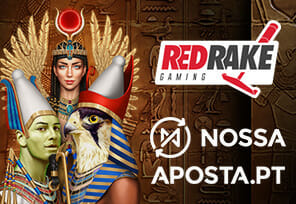 Red Rake Gaming (RRG), one of the most recognizable iGaming content suppliers, has signed a partnership with a leading Portuguese online casino operator, Nossa Aposta.

The Portuguese operator was established in 2017 and has since seen major growth, expanding its portfolio to more than 1,000 slots, all designed for desktop and mobile play. Aside from offering premium slots, Nossa Aposta also offers pre-match and live betting services.

Representatives from Nossa Aposta, which also recently entered an agreement with Pariplay, say that they are delighted about working with Red and that they are focused on additional proprietary content.

Commenting on the significance of the partnership, Chief Executive Officer for Nossa Aposta, Tiago Almeida, explained: “Portugal has strong indicators that reveal a more interested and informed public that wants to make the most of the fun of online games. We are delighted to sign this agreement with Red Rake Gaming, and offer our players what they would like to find but also to continue our revenue growth with innovative games. For Nossa Aposta players, quality is king, and as well as hand-picking all our titles, we’re strict about ensuring the player protection is always present. That is why we’re also focusing on additional proprietary content, since content exclusivity is the key to achieve a true competitive edge.”

The partnership allows Red Rake, which was recently certified in Romania, to extend its footprint across the growing Portuguese market.

Representatives from RRG say that they are happy about being in business with Nossa Aposta and that they are confident that their titles will be huge hits with the players.

Commenting on the significance of the new deal, Managing Director for Red Rake Gaming Malta, Nick Barr, explained: “We are delighted to welcome Nossa Aposta as our newest partner. Nossa Aposta has continued to make huge inroads in the .PT market since its inception and has gone from strength to strength to become a dominant force in the Portuguese online gaming market. We are very confident that our high engagement, feature packed games will be a huge hit and resonate well with the Nossa Aposta players and look forward to the upcoming launch.”

Red Rake is an online casino content provider which offers a wide and varied portfolio of top performing games across various markets which include Belgium, Italy, Spain, Portugal, Romania, Malta, and the UK. Its team consists of over 40 talented individuals that have been making online casino games since 2011.

It works closely with partners to drive its revenues through high-quality game production, exclusive promotions, and flexibility to accommodate its partners’ needs. This Spanish provider has over 30 top performing video slots, bingo, and table games.