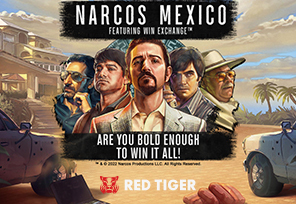 Launched on March 24, the Mexican crime drama is not only filled with characters who belong to the world of danger, notorious gangsters, and fast money but also chock-full of hot wins and rewarding bonuses. Cartel spins, random wild packages, a unique Win Exchange feature, and an opportunity to strike up to 10,500x bet – spinning the reels just got even more exciting!

From Colombia to Mexico

Sequel to Narcos created by NetEnt back in 2019, Narcos Mexico Slot uses the same 5×3 grid with 243 ways to win, however, the battlefield itself shifted from Colombia to the Land of Enchantment. It is a high volatility game with a high hit rate and a bunch of truly engaging bonus features.

Red Tiger, which became part of Evolution in 2020 following the acquisition of NetEnt, added plenty of exciting twists and turns to the original story, letting players benefit from extra spins, random chances to double their prizes, and try their luck with the Win Exchange

“This is our second Narcos game, with the first one being done by the team at NetEnt. We have had a lot of success sharing IP between NetEnt and Red Tiger, for example with Gonzo’s Quest and Piggy Riches. It’s always exciting working with branded games, and we’ve been part of some brilliant partnerships”.

“This new Narcos Mexico Slot is a great example of this and it’s going to attract new and casual players in a big way. Narcos Mexico Slot gives players the chance to enter this fast money world in a completely fresh way and we can’t wait to see what players think of it.”

No doubt, Red Tiger knows what is fun. Triggered by three same-named scatter symbols on reels 1,3, and 5, Cartel Spins are played on the enlarged 10×10 grid and start with the 2×2 high-paying Cartel Leader icons locked in the 4 corners of the slot. Initially, players get 3 free and during the bonus, only special icons appear on the reels to expand the leader’s territory, increase a multiplier, or add more extra spins.

…or more in the base game will activate the Win Exchange

option that offers players to exchange 100x their stake for 3 Cartel Spins. The chance of winning the gamble will be shown through a spinning wheel – the larger the green segments, the better the odds to pocket an award.

As for the range of stakes, it starts at $0.20 and goes up to $10, making Narcos Mexico Slot a game for every bankroll. Enhanced by the solid RTP of 95.7%, this title comes with an impressive maximum possible win capped at a 10,500x bet – the multiplier is increased by Marked Territory symbols that appear during the battles.

To make things even more exciting, in the base game, the airplane will randomly pass above the screen to drop Wild packages while one of the Leaders can simply make a call to double your winnings!