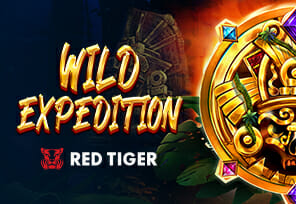 Nick and Cara, the stars of Red Tiger Gaming’s latest slot, Wild Expeditions, will embark on an adventure in which they will try to find the gold that the jungle and old antique buildings hides.

We can’t help but notice how the heroes of this title resemble the characters of some famous movies. More specifically, Nick resembles Indiana Jones, and Cara looks like Lara Croft.

The grid is located deep in the jungle surrounded by greenery and old buildings, and is decorated with card-themed, low-paying symbols of clubs (

). High-paying ones will be represented by backpacks, magnifying glasses, and sun symbols.

The slot contains 5 reels and 4 rows including 30 fixed paylines. The theoretical Return to Player is 95.67% while the volatility of this game is high!

Nick is the Wild during this exploratory journey and during the game, he replaces all paying symbols. Five related Nick symbols are worth 10x the bet.

Special features we’ll encounter in the adventure are free spins, Jungle Treasure in which Nick randomly appears to bring rewards, and Wild Kiss in which Cara locks all of Nick Wild symbols for the next spin.

Those slightly luckier players can win x2,101 their bet which is the max win of this slot. Punters can choose the bet within the already set limits by Red Tiger which are: minimum bet 0.20 coins and maximum bet 40 coins.

It has partnered with a number of casinos such as 888 Casino, Euro Casino, Betsson, Every Matrix, and Sporting bet, and has recently entered into collaborations with Lottomatica, YoCasino, bet365, and Rush Street Interactive.