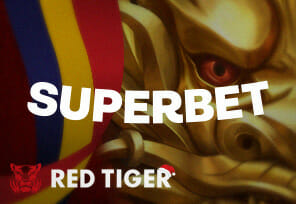 To retain the title as one of the best casino software developers, Red Tiger decided to team up with Romanian operator, Superbet, widely expanding its scope in the Romanian marker.

Moving forward, Superbet, which also recently gained ORXY Gaming and Microgaming content, will have the opportunity to offer its players Red Tiger’s popular gaming suite as well as its jackpot solutions.

What Online Slots Will be Available?

Per the agreement, some of the titles that punters from Romania will be able to enjoy if they choose this operator include Dynamite Riches Megaways, Gonzo’s Quest Megaways, Primate King, and Mystery Reels. The operator will also be able to use the provider’s hourly jackpots, which have proven to be very popular among players.

Superbet is the largest operator in Romania offering sports betting as well as casino products. However, in addition to Romania, its offices can be found in the UK, Poland, Austria, Croatia, Serbia, Cyprus, and Malta. The casino was founded in 2008, and so far the company employs over 3,500 people.

Joe Legge, Director of Gaming at Superbet, said: “Superbet continues to invest in world-class online and multi-channel operations that deliver excitement and choice to our players. To our high-quality shops we added a state-of-the-art online sports betting platform. With Online Casino we are now adding the exceptional Red Tiger slots portfolio to further enrich and differentiate the user experience.”

Red Tiger was founded in 2014. Its team consists of hundreds of experts. The company, together with this team, broke all records of spreading through Europe and Asia.

The supplier holds licenses from the United Kingdom Gambling Commission, the Malta Gaming Authority, the Alderney Gambling Control Commission, and the HM Government of Gibraltar.