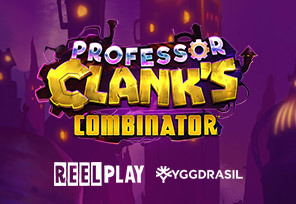 ReelPlay, one of the fastest-growing casino software developers in the iGaming industry is once again teaming up with the well-known Yggdrasil to present its new online casino release.

These two brands have been cooperating for a long time, and various interesting and popular online slots have emerged from that partnership. One of Reelplay’s and Yggdrasil’s moves was the recently introduced Money Mariachi Infinity Reels online slot that marked the beginning of this year.

However, this time the brands decided to present their clients with a new, different title with an interesting theme and engaging features.

Professor Clank’s Combinator features a grid made of 6 reels, 5 to 3 rows as well as up to 707 ways to win.

This low volatility online slot will present you with an unforgettable adventure that will give you the opportunity to win up to x10,000 the stake!

The theoretical Return to Player is a shade higher than average and amounts to 96.1%.

Professor Clank’s Combinator’s paytable is made up of low-paying card-themed symbols as well as beautiful high-paying ones a wrench, goggles, a ray gun, and a robot. The group of special symbols recognize the well-known Wild and scatter symbols.

The Wild symbol will help you create more winning combinations by substituting all other symbols during the game except the scatter symbol.

The Wild can appear on any reel except 1 and 6.

Explosions feature – after the winning combination is created, the symbols that participated in it will remain on the grid, while the others will disappear, and they will be replaced by new symbols. Scatter symbols will also remain in view.

Five or more scatter symbols on the grid will give you the opportunity to have fun with the fantastic Bonus Respins feature.

The player will be rewarded with three re-spins, and this feature offers you the opportunity to win the following prizes:

Stuart McCarthy, Head of Product & Programs at Yggdrasil, said: “Working with ReelPlay allows us to bring numerous concepts and excitement to the market through a plethora of unique titles. Professor Clank’s Combinator brings a thrilling take on the popular hold and win style gameplay, while its cascading win mechanics elevate the game to a new level.”

David Johnson, CEO at ReelPlay, said: “Professor Clank’s Combinator is ReelPlay’s fresh take on cascading gameplay, where only winning symbols remain. Ways, reactions, morphs & boosters along with feature bonus re-spins and feature gamble are all in the mix. Professor Clank is the most extraordinary inventor engineer; with his funky gear and trusty robot, he’s nothing like you’ve ever seen before.”