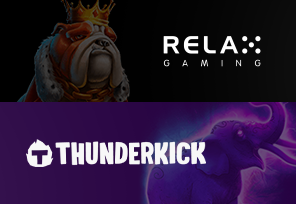 Relax Gaming (RG), one of the leading and most famous iGaming content developers and aggregator of premium and engaging content, announced that the company has added another brand to its list of Powered by Relax partners!

Since the beginning of the year, RG has entered several major partnerships and added some of the most famous B2B brands in the online gambling industry to its list of partners.

One of the most recent ones includes a deal with the best-known iGaming content supplier Quantum Gaming thanks to which RG’s clients can take advantage of several engaging online casino releases such as Temple Tumble, Snake Arena, and the blockbuster hit, Money Train 2 as well as much more.

Relax Gaming stated that the company has joined forces with the ever-growing studio Thunderkick.

This Stockholm-based online casino provider has in a short time established itself as one of the leading brands in the region, as well as in the industry.

The portfolio of this brand is made up of an array of engaging and impressive online casino games, among which are the fan-favorite hits Pink Elephants, Esqueleto Explosivo, and Beat the Beast, which have secured the trust of punters across some of the key markets globally.

Thunderkick has so far launched over 50 of its best products in more than 15 jurisdictions with the intention of further expanding that circle.

Commenting on the partnership, Simon Hammon, CEO at Relax Gaming, said: “We’re absolutely thrilled to welcome Thunderkick into the fold as our latest Powered By studio partner. This is a studio that has impressed us for years with its innovative games and unique approach to development. I’m very excited to see how this new relationship blossoms in the coming months and years.”

Fredrik Ekholm – Head of Sales and Marketing EMEA: “Everyone at Thunderkick is delighted to have finally signed with Relax. This feels like a process that has evolved over the years as there has been genuine interest from both parties at some time. This partnership will see us add more value to our offering, reaching even more players in key regulated markets. I’m sure we’ll enjoy great commercial success together going forward.”

Relax Gaming is by far one of the most popular developers in the industry who has reached the top of the ladder in the iGaming industry with its hard work. So far, it has made plenty of partnerships that have helped it enter some of the key global markets.

Among the major deals was the agreement with MegApuestas, which enabled the developer to launch its products in Colombia and reach an even wider audience.