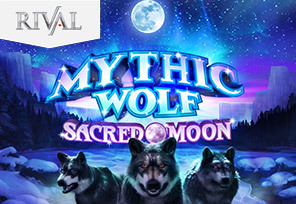 Players in the United States and other countries are well familiar with the captivating 50-line story of running wolf, beautifully told by Rival. The original Mythic Wolf is still in high demand at online casinos, however, all chances are, the Sacred Moon sequel will surpass the success of its predecessor.

…has enough space for 720 pay lines where players can land their winning combinations, naturally, with the help of wild icons that have 2x, 3x, and 5x multipliers. To make the journey through the frosty night even more exciting, wild Wolves can appear in massive packs stacked up to five icons high.

No casino slot would be complete without coveted free spins; therefore, it comes as no surprise that the newest hunt for prizes on a glacier under the Aurora Borealis brings punters numerous opportunities to get more bang for their bucks. Namely, hitting 3, 4, or 5 Sacred Medicine Feathers scatter icons anywhere on the screen will deliver 8, 12, or 20 treats on the house respectively.

…is another reason to join the wolf pack. The stunning snowy scene with mesmerizing lights of Aurora Borealis in the background will reveal the two rings of the wheel, players may spin both of them twice to see their huge coin payouts.

In addition to that, after each winning hit, slot buffs will be able to gamble their prize using the standard Heads or Tails feature. The latter is available both in the base mode and during bonus rounds, offering players to gamble all or 50% of their winnings in order to pocket twice as much as the original prize.

On The Hunt For Huge Payouts

According to Rival, “players who join the wolf pack beneath the sacred moon will howl with triumph” as they hunt down huge payouts in this exciting new online slot. Well, the broad range of stakes makes it a game for everyone – while cautious newbies can start spinning already at $0.25 per round, flamboyant high-rollers can enjoy the frosty night air at an impressive $62.50 a spin, which is a maximum bet.

The RTP of Mythic Wolf: Sacred Moon is set at 94.91% and given the low volatility of the game, players can expect it to pay more frequently although somewhat smaller prizes. Needless to say, this slot is fully mobile-optimized and equipped with a standard set of functions, including the Autoplay option and the opportunity to choose the speed of play.