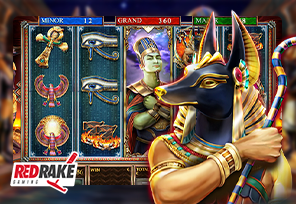 Red Rake Gaming, a Spanish developer of premium player-focused online casino content, has announced the official release of its latest slot Guardians of Luxor. The game was actually launched somewhat earlier but was available only to a selected number of exclusive operators, so going forward, it is offered across all regulated markets where the company is present.

Mythical Egypt at the Fingertips of Players

Soon after taking players on an exciting trip to awe-inspiring African Savannah, Red Rake Gaming offers slot buffs to visit ancient Egypt and discover untold riches hidden inside the pyramids and guarded by mythical Gods. Spectacular graphics and a matching soundtrack help conjure up the one-of-its-kind atmosphere while numerous bonus features are in charge of delivering truly epic wins.

It’s safe to say that the scarabs are the most important symbols in the entire paytable since they are not only the highest paying icons of all but also wilds able to substitute for all other regular symbols. Plus, when they become sacred, players can expect staggering prizes!

Guardians of Luxor is a treasure trove of engaging and rewarding bonus features that range from the sought-after free spins to an interesting Wheel mini-game (similar to the one offered by Longmu and the Dragons). As already mentioned, Sacred Scarabs are the highlight of this slot due to their ability to deliver epic prizes in a number of ways.

When a scarab icon appears on the screen, the central reel will launch the Sacred Scarab feature. The scarab will magically turn into three sacred scarabs fixed in place for the duration of 3 free spins. Each additional scarab will remain on the reels and grant another set of 3 free spins.

But that’s not all…

…because during the Sacred Scarab feature, players can win one of the Jackpots – Minor, Major, or Grand and pocket 10x, 40x, or 300x total bet respectively!

The silver and gold pyramid symbols show up on the screen to multiply the player’s stake by up to 100x and 200x accordingly while the Osiris wild respin symbol can expand to cover the entire reel, substituting for other icons and triggering a respin in other reels. As for the Wheel bonus, it is activated by 3 wheel symbols on reels 1, 3, and 5, awarding a multiplier.

Finally, there are more free spins – just land 3 Anubis symbols on reels 2, 3, and 4 and enjoy up to 50 rounds on the house!

“Travel back to ancient Egypt with Guardians of Luxor”, redrakegaming.com, June 23, 2022.