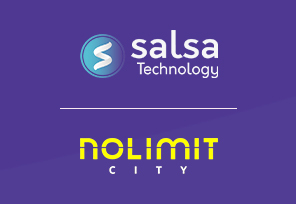 Salsa Technology, one of the most-famous B2B brands in the iGaming industry, recently enriched its famous and popular Salsa Gator Platform with EGT Interactive’s products.

However, even after this significant agreement, the company continues to meet its goal of brand expansion and global growth, as evidenced by the new deal.

Salsa Technology has announced that it has shaken hands with well-known casino software developer Nolimit City to further enrich its Salsa Gator portfolio.

Nolimit is one of the best-known developers known for its innovative, feature-packed content that features interesting themes as well as various well-known mechanics such as xNudge®, xWays®, xSplit®, xPays®, xBomb®, and Infectious xWays ®. The portfolio of this brand consists of over 50 terrific titles, and some of them will now be available in Latin America thanks to the Salsa Gator platform.

Among the titles that will be launched on this platform are popular hits including fan favorites San Quentin xWays, Fire in the Hole xBomb, xWays Hoarder xSplit, and Book of Shadows.

Clients who choose to explore these amazing titles will be able to do so through quick, easy, and just one integration.

Salsa Technology’s Head of Marketing & Communications, Eliane Nunes said: “Nolimit City knows exactly what they are doing when it comes to designing games that players have a real affinity with. There is no doubt that these games will be an instant hit with our network.”

Salsa Technology is one of the most renowned service providers in the LatAm region. The brand is producing customized solutions for iGaming, and in addition to Latin America, it also distributes them in Europe. This B2B brand was established in 2017 with its headquarters in the Caribe.

Among the latest steps, the brand has taken has been the appointment of a new COO. Namely, the experienced veteran, André Filipe Neves was appointed to this honorary position, thus the company continued with its growth strategy.

The new COO will be in charge of technology disciplines including platform and content evolution all the way to marketing and customer relations.

On this occasion, the new COO André Filipe Neves said: “Salsa has established itself as a dominant force within the iGaming space thanks to its standout iGaming solution and I am thrilled to have the chance to help the company deliver on its aspiring business goals.”