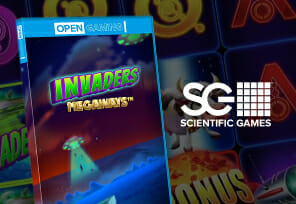 Scientific Games Corporation has just added another game as part of its ever-increasing portfolio. This time, players will have an opportunity to enjoy Invaders Megaways

, a space-themed game with a feature on every spin and a Uni-Cow experience.

platform starting from June 15. The game takes inspiration from the Planet Moolah slot, while also adding the popular Megaways

mechanic with a feature-rich style.

Going forward with the gameplay, players will also have an opportunity to enjoy the action across 6 reels, with a UFO appearing on each spin and choosing a random symbol to become wild when landing on reels 2 to 5. If the player hits four or more scatters to enter casino spins, a random picture element is selected to work as a wild for the whole round. Each of them comes with a modifier, starting from expanding wilds to Megaways

The game also includes the Uni-Cow feature which appears in the base game. It causes all reels to show between 7 and 10 symbols, which results in up to 1,000,000 Megaways

Invaders Megaways also stands out with detail-oriented design and an appealing soundtrack, which increase the level of engagement even more. Scientific will continue to deliver new games with Megaways

“Our customers enjoy having access to exclusive games on our platform, and it has been great to offer the opportunity to experience the excitement that comes from playing Invaders Megaways

. We have a really strong relationship with Scientific Games, and this game is another example of bringing high-quality content to our players.”

game will cause a buzz. The game includes new standards in terms of presentation and gameplay to deliver a fresh and entertaining playing experience. The game comes with a feature on every spin in the main game which adds to the variety and appeal of the game.

The game also includes the Uni-Cow feature while also adding a new level of appeal and they can’t wait to see customer reactions when it comes out.