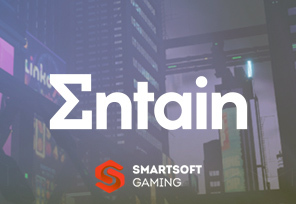 SmartSoft Gaming, one of the well-established and promising iGaming content suppliers in the online gambling industry known for its premium and engaging portfolio, has announced a new partnership with another industry leading B2B brand!

2022 will certainly be remembered for the numerous collaborations that contributed to SmartSoft further strengthening its position in the industry by launching its portfolio with some of the most popular companies in the industry.

One such important deal saw the association of the developer with the outstanding aggregator Pariplay and the launch of its portfolio on Pariplay’s Fusion Platform.

However, the year is not over yet, and the developer has one more thing up its sleeve…

SmartSoft boasted a new partnership and said it had joined forces with sports betting and gaming giant, Entain!

As announced by these giants, this supplier of premium games will supply its new partnership with an array of incredible, feature-packed, and unique content that has proven to be one of the most popular among players across the globe.

Among the available titles, in addition to numerous hits, you will also find the most acclaimed online title JetX.

SmartSoft can boast of a long-term collaboration with one of Entain’s brands, Crystalbet.

Crystalbet is an operator that offers its clients the opportunity to engage in their favorite form of entertainment with non-traditional casino games, but also slots, live casino titles, and board games.

Based on this successful deal, SmartSoft is now launching its acclaimed library of titles on the platforms of other Entain brands including Bwin, Sportingbet, PartyCasino, and more.

However, that’s not all; in addition to fantastic products, SmartSoft will supply its new partnership with various promotion tools that will contribute to greater player’s engagement!

Happy to Announce the Partnership!

This agreement marked an important milestone for SmartSoft, which will reach an even greater number of players and guarantee an even more enviable position among the leading B2B companies in the industry.

Smartsoft’s Chief Executive Officer, Guram Gotsadze could not hide his excitement regarding the new deal and commented: “Smartsoft Gaming has built its reputation as a pioneer in non-traditional casino games, with a constant focus on innovation and user experience. Entain has been our great partner on a local scale and now having our games live on Entain brands globally is a fantastic opportunity and yet another endorsement that SmartSoft is the best-in-class.”

The post SmartSoft Gaming Teams Up with Entain to Launch Games Further! first appeared on RealMoneyAction.com.