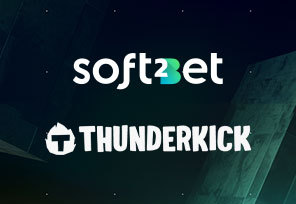 Soft2Bet, a leading casino and sportsbook platform supplier, has announced that it has clinched a new deal that will see a drastic expansion of the brand’s offering thanks to the latest collaboration with Swedish casino software developer, Thunderkick.

The agreement follows Thunderkick’s recent partnership with Pariplay and will see the launch of its content on the Soft2Bet platform.

Important Milestone for Both Brands

This is an important move for Soft2Bet if we consider that Thunderkick is a leading supplier of premium and engaging content, and the company has expanded its business roots across the globe. Brand titles such as Midas Golden Touch, Esqueleto Explosivo 2, and Sword of Khans have proven to be one of the most popular among punters in various jurisdictions.

The integration of the developer’s portfolio will drastically expand Soft2Bet’s casino offering, which will have a positive impact on the company’s position in the industry.

On the other hand, this casino software developer will drastically expand its business scope. Namely, the content of this company will reach an even greater number of punters, which will bring benefits to the company in terms of increasing the number of clients.

Thrilled to Be Partners

Daniel Mitton, Director of Gaming at Soft2Bet, said: “We are thrilled to enter into this partnership with Thunderkick. The company is known for continuously producing strong, iconic casino games that suit a plethora of player demographics and is a worthy addition to the Soft2Bet family. This deal significantly boosts our casino portfolio and sets us in good stead for achieving our goals for 2022.”

Fredrik Ekholm, Head of Sales and Marketing EMEA at Thunderkick, said:“As a studio that takes great pride in creating innovative and unique slot games, Thunderkick is thrilled to announce the sealing of a great new partnership with Soft2Bet. Soft2Bet’s wide player base and market reach will make a great addition to our future offering.”

Thunderkick is a company established in 2012 with headquarters in Stockholm, Sweden. In addition to this headquarters, the company also has offices in Malta. It holds a license issued by the Malta Gaming Authority (MGA) as well as UK and Romanian supplier licenses. Also, the brand holds certificates that allow it to operate in several other key markets including Sweden, Denmark, Gibraltar, and Portugal.

The post Soft2Bet Expands Portfolio Further Thanks to Deal with Thunderkick first appeared on RealMoneyAction.com.