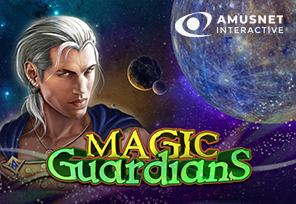 EGT Interactive, a Bulgarian-based software provider founded in 2002, opened a new chapter of the company’s development and is officially rebranded to Amusnet Interactive, as announced at the end of March.

Under the new name, the structure of the team remains the same, and thus its goal – continuing to enrich its portfolio with exciting online slots, highly entertaining live casino products, Keno, Lotto and other state-of-the-art games.

To start this new journey, the provider has prepared for its players a world full of surprises, magic features and great winning potential through its newest online slot – Magic Guardians.

Step into the fantasy world with Magic Guardians

The symbols that we will encounter on this journey are, to begin with, A, K, Q and J, which represent the lowest-paying symbols…

Are there any Special Symbols?

The first special symbol is a wild, represented by a unicorn. It appears on the 2nd, 3rd and 4th reels only and has the role of substituting all symbols except for Scatters and Super Game symbols.

The scatters can land on the 1st, 3rd and 5th reels and trigger 15 Bonus Spins. During the spins, the initial multiplier is x1, but if a player manages to retrigger the feature, the multiplier will be increased by 1, up to the maximum x5.

Only during the bonus spins, if 2 scatter symbols land on the first and third reel and the Super Game symbol is found on the last reel, the punters will trigger 10 Super Games. The feature comes with special reels which are composed by the highest paying symbols only!

Of course, as it used to be the main feature of EGT, Amusnet also enriches its online slots with Jackpots!

The game includes a 4-level mystery progressive jackpot that can be randomly won. Each jackpot is illustrated by a card suit where spades bring the highest reward.

The lucky player will select cards from 12 face-down cards until revealing 3 matched suits.

If you want to check out the game, we recommend you to try the Demo Version first, which is already available on the provider’s website!

The post Step into the Fantasy World full of Magic Rewards with Magic Guardians by Amusnet Interactive first appeared on RealMoneyAction.com.