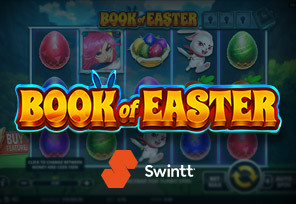 Swintt, one of the most famous casino software developers in the iGaming industry, will make this Easter unforgettable! Namely, the developer will take you to beautiful parts of a distant country surrounded by mountains and greenery. Let’s see what the Book of Easter is hiding!

The grid is located between beautiful mountains and consists of 5 reels and 3 rows. It is adorned with beautiful Easter symbols including low-paying ones such as painted eggs in green, purple, blue, yellow, and red as well as high-paying ones like a carrot, an egg basket, a rabbit, and a beautiful girl with pink hair.

This high volatility online game will simply delight you. In addition to the many features you will encounter, during this adventure, you can win up to x4,434 the bet. The theoretical Return to the Player is slightly higher than average and is 96.18%.

What is common in the brand’s book series of slots, is that the logo book symbol (the rabbit in this case) will serve as both the Wild and the scatter. This book will replace all the symbols during the game and thus help you create more winning combinations.

Golden key symbols may also appear on the grid. When a player manages to collect at least 3 of a kind, a random symbol will be chosen to become expanding.

Also, a minimum of three books in view triggers the Bonus Spins feature and Multiplier Win. The punter will then be rewarded with 8 bonus spins and a certain multiplier win. This feature can be retriggered.

In addition to all the above, the developer has prepared a Bonus Buy option for its clients, which will transfer you directly to the Bonus game after you pay the required amount of money.

David Mann, Chief Commercial Officer at Swintt, said: “This April, we’re inviting players to join us on an egg hunt like no other in our cracking new Book of Easter slot. Another exciting chapter in the iconic series, Book of Easter incorporates the same Free Spin and expanding symbol mechanics that have made previous ‘Book’ slots such a success, only this time the action is further enhanced by the addition of collectible key symbols and a Buy Feature option. With players able to get their hands on top prizes of 4,434x their bet, they’d be hopping mad to miss it!”