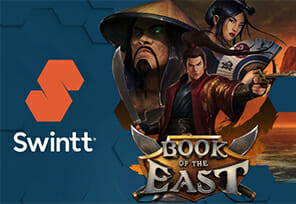 Swintt, a casino software developer, allows players to time travel to the Far East during the time of battles, battleships, and brave warriors. Players will sail through the restless sea in an old worn-out boat and fight for valuable prizes.

There will be a wooden grid on the deck surrounded by anchors and swords. As the strong wind moves the sails, card-themed low-paying symbols will appear on the grid. They will be joined by high-paying symbols made up of a beautiful girl warrior with a fan and a young handsome warrior.

The grid bordered with wood is in the classic form of 5 reels and 3 rows, which is not uncommon. This 10-payline video slot brings you the opportunity to get 4,434x your stake! Dramatic music will accompany you throughout the journey as well!

Return to Player is 96.18% and stays the same whether you are in the base game or you have selected the Buy Feature option. Another important point is that the game is labeled as a high-volatility one! Nice!

David Mann, Chief Commercial Officer at Swintt, said: “With its high production values and innovative features, Book of the East is one of our most ambitious slots to date. As the first game in the Swintt catalog to offer a Buy Feature option, we’re sailing into uncharted waters for the company and we hope that players will join us on what promises to be an unforgettable adventure.”

Free Spins Waiting for You

The old Dragon Book has the role of both a Wild and a Scatter symbol. It will replace any other symbol during the game. If three or more Dragon Books appear you will be rewarded with free spins! In that case, a lucky punter will get 8 Free Spins plus a multiplier prize of up to 200x your stake.

During the spin, expanding symbols can also appear (it cannot be replaced by the Wild symbol either), which are triggered when three or more gold keys land on the grid.

The provider gives you the opportunity to choose the bet that suits you the best within the limits that the company already set. These limits are a minimum bet of 0.02 coins and a maximum of 50 coins.

This hit was preceded by great titles such as Zombies On Vacation, Sword Warriors, Samurai Blade, Perfect Pairs Blackjack, and Lone Rider XtraWays

, and on their official website is announced that a new release called Rock N ‘Ways XtraWays will soon be available to players.