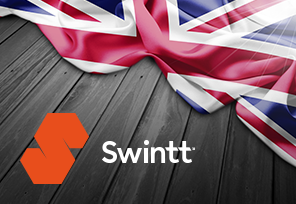 Swintt, one of the biggest giants in the online gambling industry and a provider of premium and most sought-after content, has brought amazing news that will delight punters from another country!

This innovative developer has already expressed several times the desire to become a leading brand in the iGaming industry, which we could see from a large number of expansions that the company achieved during this and previous years!

To these successes, Swintt adds the latest one, which will see it enter another regulated and key market!

Swintt has brought another piece of important news about the expansion of the supplier’s business roots to another leading market in Europe, the UK!

Namely, the company announced that the company has guaranteed approval from the competent authorities to launch its content in this market!

A successful application for a UK license means that punters on UKGC-regulated platforms will be able to find the provider’s outstanding content and engage in their favorite form of entertainment with amazing online casino titles!

The launch of content on UKGC-regulated platforms will take place in several stages. The first phase will include some of the best titles including Xtra range of slots, Aloha Spirit XtraLockTM and Mystic Bear XtraHoldTM as well as Candy Gold.

They will be accompanied by The Crown starring Vinnie Jones!

David Mann, Chief Executive Office at Swintt, said: “Swintt is thrilled to be able to announce the issuance of a UK license that will enable us to share our incredible collection of games with players at UKGC-licensed platforms for the very first time.

“While we should be able to announce the first of our UK partners shortly, in the meantime I can assure players that it won’t be long until they’re able to access some of our award-winning titles and experience the features that have helped us become one of the leading software providers.”

The new approval marked a very significant milestone for the company! The UK is one of the leading and fastest-growing European markets that offers great opportunities to both players and B2B brands.

Swintt got the opportunity to further expand its business scope and thus get closer to achieving its goal of global expansion. This means that the developer has also improved its position in the iGaming industry.

The post Swintt Receives Approval to Operate in the UK! first appeared on RealMoneyAction.com.