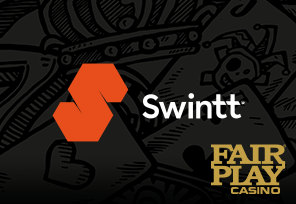 Swintt, one of the leading casino software developers in the iGaming industry which recently launched its content on the Estonian and Latvian market in collaboration with renowned Finland-based operator Paf, announces that it has struck a new significant deal that will see further expansion of the developer’s business roots.

This popular provider said that the company has once again signed an agreement and thus further strengthened its partnership with globally known operator, Fair Play Casino.

This is a new collaboration between these two giants that will mark another important milestone by the developer once again stepping into the Dutch market. This deal was preceded by a handshake between the casino and Swintt that saw the launch of the developer’s online casino releases further, in which players could enjoy land-based gaming halls.

The company announced that Swintt’s fantastic and feature-packed titles will be exclusively available on the Fair Play Online Casino platform.

This time, the developer will launch its premium games, and players who decide to check out offering this innovative operator will have the opportunity to check out hits such as Master of Books and the recently-launched Lucky Jimmy as well as fan-favorite Aloha Spirit XtraLock

and many other top-tier games.

The cooperation of these two giants was also strengthened at the right moment. Namely, Swintt recently presented its slot The Crown which will give players the opportunity to get an unforgettable iGaming experience with a special Wild symbol, unique features, and interesting gameplay.

David Mann, Chief Commercial Officer at Swintt, said: “We’re thrilled to be taking games from our slot and premium slot collection live at Fair Play Casino Casino. The latter is already hugely popular with Dutch players due to their presence in Fair Play Casino’s live venues, while the former will introduce them to a world of great games as we make our first steps into the regulated online market.”

Pascal Jahnsen, Business Development Manager at Fair Play Casino, said: “With Swintt slots having already implemented a popular fixture at Fair Play’s bricks-and-mortar casinos, we’re delighted to be able to extend our partnership to bring their games to into the regulated Dutch iGaming market. Having recently debuted their much-anticipated release, The Crown, the timing couldn’t be any more perfect for us and we’re sure the full Swintt line-up will go on to be a huge hit with players at Fair Play Online Casino.”