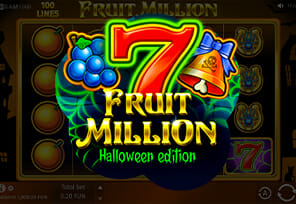 This spooky season, BGaming has come up with a fantastic idea to offer its users one of the most popular old slots, but in a Halloween edition. The graphics are painted in black and brown, and cats, bats, and crows can be seen in the background. It is perfectly designed in the spirit of this Halloween holiday!

However, this dark ambiance will be illuminated by a golden board with fruit symbols. The low-paying symbols are plums, oranges, cherries, and lemons, and the higher-paying ones include grapes, watermelons, and a golden horseshoe with a spider on it, while the highest-paying symbol is Lucky Seven!

The little square pumpkin is carved in the spirit of its function with the Wild logo on it. It can appear on reels 2, 3, and 4 and replaces all symbols except scatters.

Scatters are presented in two shapes – as a bell and as a green diamond. The bell appears on reels 1, 3, and 5, and all three of them will bring you a nice win.

A diamond, unlike a bell, can appear on any reel, but the payment depends of the number of symbols.

The Wild can be expanded to the lower and upper fields, i.e. it can cover the entire reel and thus allow the player to make a significant gain.

Katherine Puteiko, CS Marketing Manager at BGaming expressed her opinion and said: ”Fruit Million is always relevant whether it is Christmas eve or scary Halloween. We want our players to plunge into the atmosphere of each holiday! But this is a nice bonus to great features that allow players to win really often!”

Since it first came out in December 2020, Fruit Million has changed its theme more to evoke holiday vibes being celebrated at the time. This is how the editions for Christmas, Valentine’s Day, Halloween, its Summer Version, and other holidays were created. Once the holiday is over, this title returns to its original version so you should know that you do not have much time to enjoy this one!

The post The Halloween Edition of Fruit Million Sure to Brighten Up This Holiday! first appeared on RealMoneyAction.com.